Yeshwant Ghadge is being commemmorated at the Cassino Memorial on Panel 17.

Citation:
"In Italy, on 10th July, 1944, a Company of the 5th Mahratta Light Infantry attacked a position strongly defended by the enemy.
During this attack a rifle section commanded by Naik Yeshwant Ghadge came under heavy machine-gun fire at close range, which killed or wounded all members of the section except the commander. Without hesitation, and well knowing that none were left to accompany him, Naik Yeshwant Ghadge rushed the machine gun post. He first threw a grenade which knocked out the machine
gun and firer, after which he shot one of the gun crew with his Tommygun. Finally, having no time to change his magazine, he grasped his gun by the barrel and beat to death the remaining two men of the gun crew. Unfortunately Naik Yeshwant Ghadge was shot in the chest and back by enemy snipers and died in the post which he had captured single handed.
The courage, determination, and devotion to duty of this Indian N.C.O. in a situation where he knew the odds against him gave little hope of survival were outstanding."
LG 36774/5016. 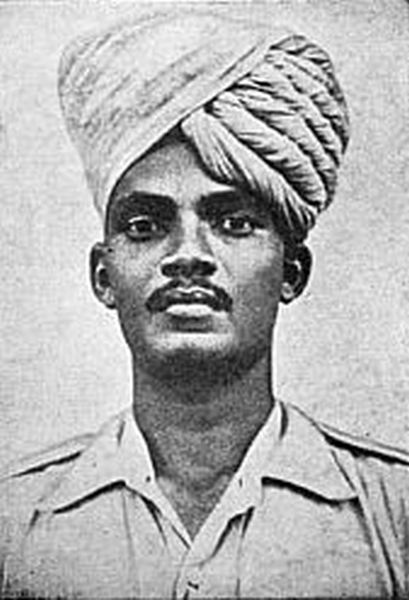