Karl Strecker was born on September 20th 1884 in Radmannsdorf. After he finished his school he wend to the Officer Academy and came as 2nd Lieutenant with the Ordens-Infanterie-Regiment 152 in Marienburg. During the First World War Strecker was promoted to Regiments-Adjudant, Kompaniechef and later on even till Battaillonkommander. He becomes a stafmember with the Eisenbahn-Transport-Abteilung West and later on he becomes the I. Generalstaboffizier of the 121. Infanterie-Division.
As a Major he left the Reichswehr on January 3rd 1920 and wend to the Sicherheitspolizei. Strecker served at several locations until he became the Commander of the police school in Münster. After the introduction of the Military Service, Strecker became the Kommandant der Heeres Dienststelle I.
During the outbreak of the Second World War Strecker was the commanding officer of the 79. Infanterie-Division and fought with this unit at the Polish and French front and they were also involved with the invasion of Russia. On April 1st 1942 Strecker was promoted to General der Infanterie and he became the commanding officer of the XVII Armee-Korps. On June 12th 1942 he took over the command of the XI Armee-Korps and with this corps he took part in the battle of Stalingrad. Strecker was on January 31st 1943 even promoted to Generaloberst but he was forced to capitulate on February 2nd 1943 in the northern part of Stalingrad. He became a Russian prisoner of war and was finally released on October 19th, 1955. Karl Strecker passed away in Riezlern on April 10th 1973. 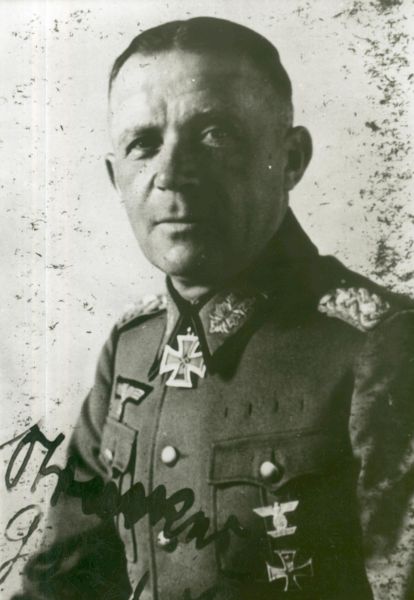