Awarded for his actions on 04.07.1943, during the preliminary attack of the 11. Panzer-Division on the day before Operation Citadel officially began. On this day, which saw elements of the division attacking towards Novoselovka, he particularly distinguished himself.

On the 23.08.1944 Major Thieme, commander of the Feld-Ersatz-Bataillon of the 11. Panzer-Division, was stationed in Montelimar. On this day he received the order to block the GrenobleLyon road. Reinforcing his Bataillon was an NCO training group (equipped with Panzer II's), the Panzer-Aufklärungs-Abteilung 11, the I./Pz.Gren.Rgt.110 and 1. Batterie (self-propelled artillery). Together these units formed Kampfgruppe Thieme. His troops first engaged in combat to occupy La Coucourde and the Rhone valley, and later that day prevented an Allied thrust west of Crest.

A few days later, on the 27.08.1944, Kampfgruppe Thieme was reorganized (it now contained (I./Pz.Gren.Rgt.110, 1./Pz.Pi.Btl. 201, 2 batteries of artillery and 8 Panthers). They received the new order to take Romans-sur-Isère and the local supply dump there. Thieme launched a surprise attack on the US troops stationed there and smashed them, thereby allowing the main body of the 19. Armee to withdraw through the Tain valley.

On the 31.08.1944 while reassembling his replacement Bataillon in Bourg en Bresse, he learned that the Americans had taken the bridge at Pont d'Ain. Thieme immediately gathered all available forces and recaptured the bridge from the US, and blew it up to prevent a rapid pursuit by the Allies.

On the 06.09.1944 Thieme, now deputy commander of the Panzergrenadier-Regiment 111, was ordered to establish a blocking position at the pass at Pont-de-Roide (30 km south of Belfort). However he only had the I./Pz.Gren.Rgt.110 available. Being out of contact with the rest of the Division, he gathered together all local Heer and Luftwaffe troops into a Kampfgruppe. With these forces he established a defensive position along the line RochesPont-de-RoideRemondants, and was able to fend off US attempts to break this line. Thus the advance of the American army into the Rhine plain was prevented.

Thieme was awarded the Oak Leaves to his Knight's Cross for this string of successful delaying actions.

Thieme and his Kampfgruppe proved to be one of the best German units at hand during the battles at the Remagen bridgehead in the timeframe 09.-19.03.1945. In this period they were able to repeatedly bring US attacks to a halt, inflicting losses of 22 tanks, 218 confirmed dead (plus other equipment) as they did so. Thieme was recommended for the Swords for his tenacity during these battles.


156th Award.
Thieme was recommended on 10th April 1945 with support of Generalfeldmarschall Model. Although all formal routes were taken, it was not formally awarded. However due to the so called Dönitz Erlaß, this could be considered a justified awarding. The awarding therefore was accepted by the Ordensgemeinschaft der Ritterkreuzträger and the Federal German Government. According recent research (Scherzer), the awarding however would have been not official. 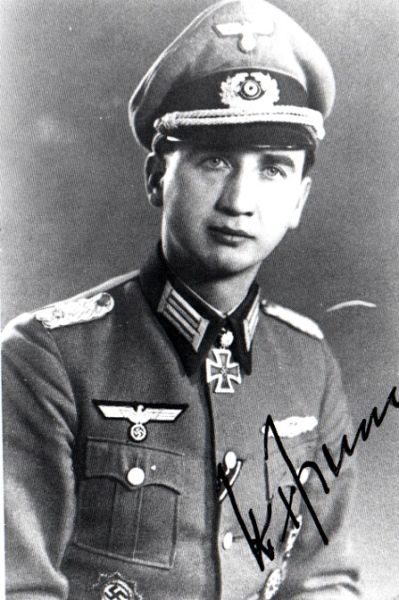