November of 1944 was coming to an end, and we did not get the large-scale Russian attack that we had expected, but instead we suffered from heavy enemy artillery shelling. However far behind the Russian lines, we heard artillery fire from time to time and knew from prisoner statements that "Ivan" was indeed preparing for a major attack.

My Divisional Fusilier Bataillon 205 was deployed a few miles behind our village to build a reserve position should the enemy break through. Every morning, my men marched there to work and returned to the village in the evening. This small ruined village that housed my Bataillon was far behind the defenses of a security battalion positioned further up, and we thought we were well protected. But this 800-strong battalion with its commander had just come to us from France to the front and had little combat experience. This my men and I would soon see very clearly!

I had an old stone house converted into a shatterproof officer's casino, where I had a leisurely dinner and played cards in the evening. On the 20.11.1944 we celebrated the promotion of my orderly officer Lösche to Oberleutnant. On the 23.11.1944 my Kompanien marched back to the position at 07:00. I trained with the rear staff (clerks, radio operators and paramedics) in gas-defense. Suddenly, at 08:00, a strong enemy barrage started on both the front and rear areas of our lines. My men and I instantly jumped into the surrounding slit trenches equipped with field cap and gas mask. For over two hours, this inferno of howling artillery strikes raged around us. The old comrades will know when I write inferno what that meant in 1944 on the Eastern front! We were showered with dirt and dust that way, but thank God we had hardly any losses. Then the enemy moved his fire into the far back ground and launched his large-scale attack on a broad front. The security battalion deployed before us was immediately overrun and almost completely wiped out. Some partially seriously wounded comrades and also the commander came past us. In full flight, they called to us from afar: Ivan is coming, save yourself if you can! And indeed, behind them appeared the first Russians in attack formation.

My soldiers were back at the trenches without heavy weapons and ammunition. All our baggage was in our reserve position. If the Russians continued to break through now, they would be unstoppable and our losses would be high! Also, there are no other combat troops in the area and behind us the way to Frauenburg was open. With all of that I had to make a quick decision.

I collected my staff (about 20 men), who had retreated backwards, and divided them into two groups - one under my command, the other under Oberleutnant Lösche - before launching a counterattack against the approaching Russians with a loud Hurra and a loaded rifles.

They were apprehensive - unaware of our small numbers - and hesitated to continue their attack. Some were already crumbling backwards. So on to them we went with roars and well-aimed carbine shots, I fired with my men. We managed to amaze the Russians and beat them back and regain the already overrun first position. My brave Oberleutnant Lösche had fallen by a headshot at the head of his group. With my few people, I was able to hold the position until the Kompanien that I had immediately called in by radio arrived from the rear position and were able to occupy the defensive position. My Fusilier Bataillon had thus prevented the dangerous enemy breakthrough!

But the Russians did not think to let me and my men rest. They attacked us almost non-stop and we were only able to ward them off with great effort. After a sleepless and restless night in the morning another enemy large-scale attack took place, this time with tank support. I mobilized the last powers of my men, and we engaged them with Panzerfausts, a 7.5 cm Pak and two assault guns which had sent by the Division after my calls for help. With great losses we were able to hold our position. The crews of our assault guns knew their craft and destroyed three T 34s of the Russians in no time. The rest fled and did not return. After two days and two nights, this battle came to an end for me and my brave men.

On the 31.12.1944 I was awarded the Knight's Cross for this deed. Oberstleutnant Horst von Mellenthin, my former divisional commander and now leader of an Armeekorps, solemnly presented the award to me on the 08.01.1945, in front of an honour guard of my Fusilier Bataillon. Then we celebrated my award in a small celebration with sparkling wine at the divisional staff. 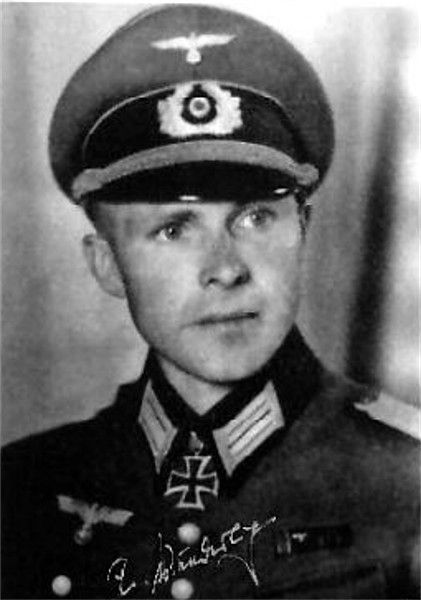