Had already received the Iron Cross 2nd Class on 22nd September 1915 as Leutnant.

Had already received the Iron Cross 1st Class on 27th January 1917 as Leutnant.

On the 08-09.08.1942 Oberst Scheuerpflug and his men distinguished themselves through the swift capture of Krasnodar and the equally quick seizure of a bridgehead over the Kuban river, the latter being of vital importance to the continuation of German operations in the area. All of this was a result of Scheuerpflugs independent decisions. Later, and without hesitating on account of the vast distances between his neighbours on the left and right, he launched an attack on the city of Nowotitarowska. Through his outstanding leadership he was able to wrest control of it in a battle that lasted long into the night. For his actions here he would receive the Knights Cross.

Dutch language mentioning available.
Mentioned in relation to the fightings near Shitomir.

Awarded for multiple successes leading the 68. Infanterie-Division in the last year of the war, which included the following

1) The fighting at Lemberg in July 1944, where Scheuerpflug was able to seal off and prevent an enemy breakthrough.

2) The holding of the Divisions defensive front between Iwoniec and Wola Sekowa (in the area of Sanok-Krosno). During this battle, which lasted from 11-19.09.1944, over 100 enemy tanks were destroyed in the divisional sector.

3) Following a breakthrough in the neighbouring divisional sector (75. Inf.Div.) on 19.09.1944, Scheuerpflug was able to stabilize the situation by building up a strong new defensive line near Oertizne through the capture of two commanding hills. He did this with only his divisional staff and supply troops from the Feld-Ersatz-Bataillon 168.

4) On 12.01.1945 Scheuerpflugs Division became the target of a major Soviet assault in its positions east of Busko-Chmelniek. The northern sector of the Irene-Position and Szydlow was held. Scheuerpflug then built a new defensive position near Motkowice. In the area around Zarwoniec-Rokitno a new enemy attack was defeated, and thereby it was possible to hold onto Warthenau. Following this all enemy attacks east of the city with the aim of breaking through to the industrial area of Upper Silesia were defeated.

The breakout of the Division from the Irene, Hubertus and Nidda positions and the battles around Warthenau can be credited to the leadership of Scheuerpflug. Under his inspiring command, his troops were able to destroy over 70 enemy tanks during this fighting.
791st Award. 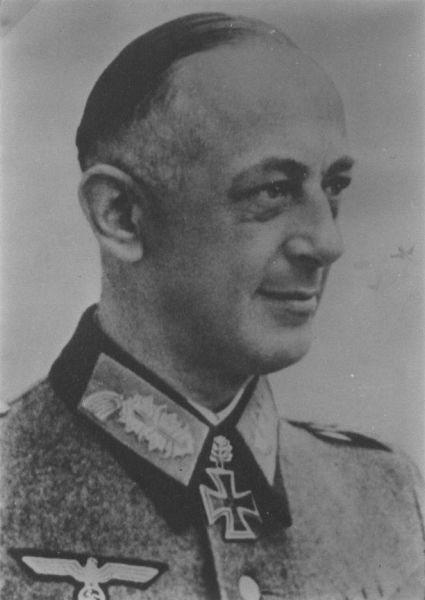