Hans-Henning Freiherr von Beust was born April 17th, 1913 in Karlsruhe, Germany. April 1st, 1931, after having finished school, he joined the Infanterie Regiment 17 as a cadet. After his promotion to Lieutenant on March 1st, 1934 he was posted to the Deutsche Verkehrsfliegerschule ( German Commercial Pilotschool) and the Streckendienst (Routeplanning department) of the German Lufthansa (Airline company). Subsequently he went to the Kampffliegerschule (Fighterpilotschool) in Tutow.

After completing his training he was put in command of 2.Staffel, Kampfgeschwader 88 of the Kondor Legion and participated in the Spanish Civil War.
January 1st, 1938 he became Staffelkapitän (Squadron Leader) of Kampfgeschwader (Fighterwing) 157. This unit was made directly subordinate to the OKL (Supreme Command of the Airforce). September 1938 Von Beust went with 7.Staffel to Kampfgeschwader 27 as commanding officer and was promoted to Hauptmann (Captain) on December 1st, 1938.

On August 1st, 1940, after having participated in the campaigns against Poland and France, he was named Kommandeur (Commander) of III Gruppe, KG 27. With this unit he participated in the fighting over England and from June 1942 onwards over Russia. March 1st, 1943, after having accomplished more than 300 operational sorties, he was promoted to Major and to Commodore of KG 27. As early as June 1st, he was promoted to Oberstleutnant. He continued commanding the unit over the soutern part of the East front until he was relieved due to illness. After recuperation, he received a post as Generalstabsoffzier (Officer of the General Staff) of Luftflotte (Wing) 5 in Norway. October 1st, 1944 het was tasked with the "Wahrung der Geschäfte des Generals der Kampfflieger" (Aid to the General of Fighterpilots) in which capacity he was promoted to Oberst im Generalstab (Colonel in the General Staf) shortly before the end of the war. At the end of the war he was taken prisoner of war by the Americans and was released from captivity June 30th 1947.

For more then 100 sorties during the Spanish Civil War.

Awarded after flying about 170 sorties, distinguishing himself as both a pilot and bomber unit commander.

Awarded after flying 410 sorties, distinguishing himself as both a pilot and bomber unit commander. 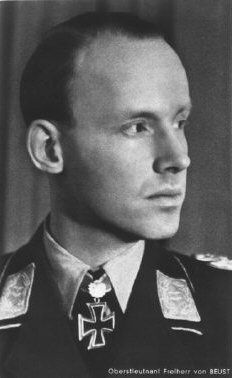