Helmut Bruck was born in Kittlitzrebeb, Silesia on 16th February 1913. After his school education he went to the Polizeischule in Bremen. The complete officers class on this school was entered in the Luftwaffe in 1935. After his pilot training he was placed with the I. / Sturzkampfgeschwader 165 at Kitzingen on 1st April 1936. On 1st November 1938 he was promoted to Oberleutnant and took command of 1. / Sturzkampfgeschwader 77 on 1st May 1939.

On 1st September 1939 the I.Gruppe was transferred to become I. / Sturzkampfgeschwader 77. With his unit Bruck took part in the campaign in Poland. And the campaign in the West, where he flew missions over Eben-Emael, the Meuse crossing and Dunkirk. After the campaign in the West, Bruck became Kommandeur of the I. / Sturzkampfgeschwader 77 on 20th August 1940. The unit was transferred to the campaign in the Balkan in 1941, where they flew sorties against the Metaxas line. After the Balkan campaign the geschwader was transferred to the homeland and received rest. Bruck followed the campaign on Crete from that distance and saw that things were not going according to plans. He collected several men from the unit and organized a Gruppe that was send to Crete to help the effords of the German troops. With the outbreak of the campaign in the East, Bruck and his unit were ordered to assist the advance of Panzergruppe Guderian towards Kiev and Moscow. On 26th February 1942, Bruck flew already his 300th mission. After that he took part in combat missions over Belgorod, Charkov, Kursk, Poltawa and Mius. On 20th February 1943 he became Kommodore of the Sturzkampfgeschwader 77 with the rank of Major. On 18th October 1943 the unit became the Schlachtgeschwader 77 and Bruck stayed its Kommodore. On 14th April 1944, then already Oberst, he flew his 800th mission. On 5th June 1944 he flew his 900th mission. Between November and December 1944 he attended a Verbandsführer-Lehrgang specialised for Schlachtflieger and was appointed Kommodore of Schlachgeschwader 151 in January 1945. On 1st April 1945 he was appointed to General der Schalchtflieger Nord and finally reached 973 operational missions when he was taken prisoner of war.

After his release he started a career as forester. He passed away on 25th August 2001 in Veitlahm near Mainleus.

Received with swords and warribbon. 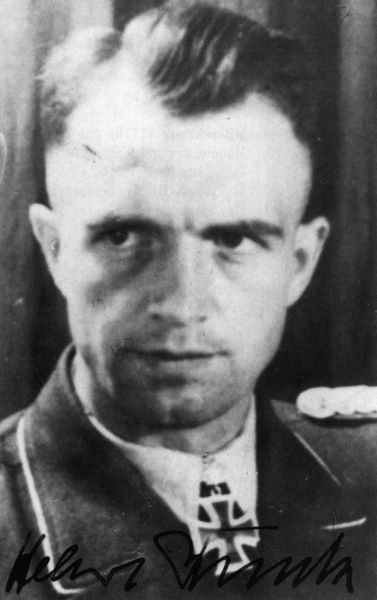