He joined the Police in 1933. From April 34 to May 36 he served in Rgt. "Hermann Göring" until transferred to the Luftwaffe flying branch for training as Observer.
He served variously in KG-155, KG-257, and KG-254 and Trägergruppe 186 (which would have placed him aboard the aircraft carrier "Graf Zeppelin" if that ship had been completed).
From Oct. 1938 to May 1945 he served in KG-55, active in Poland 1939, and 1940/41 active in France and in the Battle of Britain.
In June 1941 the unit was posted to Russia (Stalingrad), and was active in the East until in Nov. 1944 it was re-formed as a fighter squadron and re-named KG(J)-55.
He had been active as Squadron CO. of 10./KG-55 and was then trained on Me-262 jets and appointed to the unit flying these Me-262 jets. During an Allied bombing all Me-262 aircraft were destroyed on the ground being the end of his active war service.
He made 271 OPS. In total Dettke was accredited with 368 combat missions, of which 122 in the East.

Awarded for his successes as a bomber crewman. By wars end he had flown a total of 368 sorties, and almost all (if not all) of these had been flown by the time he was recommended for the Knights Cross. While serving on the Eastern front he and his crew achieved a number of notable successes including the destruction of a fuel train bound for Kiev, an oil refinery near Saratov and an important underwater bridge across the Dnieper.

Awarded for a wound inflicted on the 1st of june 1940 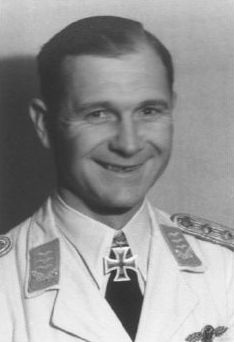