Josef Enzensberger was a mountain guide and ski instructor from Sonthofen in Allgäu.
He served as a ground-attack pilot with the I. Gruppe of Schlachtgeschwader 2, and then the I. Gruppe of Schlachtgeschwader 10.
He flew his first mission from Sicily against Malta in October 1942.
He was wounded in a forced landing in Tunisia on 20 February 1943, and made another forced landing in Tunisia on 8 March 1943, returning to his unit two days later.
His unit served in North Africa from November 1942 to April 1943, and then in Sicily, Sardinia and southern Italy until September 1943.
It then moved to the Eastern Front in late 1943, serving there until the end of the war.
On the last day of the war he flew from Budweis to the west to escape Soviet imprisonment.
He joined the new German Air Force after the war and served until he retired.
He died in a motorcycle accident on 6 September 1975.
He had a brother in Sonthofen, who ran a flower shop.

Awarded after flying over 500 sorties. This total would stand at 550 by the end of the war. 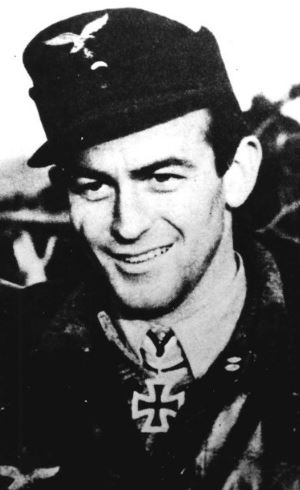