Awarded for his achievements as a bomber pilot over the course of 350+ sorties. Particularly noteworthy among his missions were major attacks against the Kursk railway station, the tank factory in Gorki and the rubber plant in Jaroslawl. He also participated in the air raid against the Poltava airfield on the night of the 21./22.06.1944 as a pathfinder.

According to the book Kampfflieger-Asse RK on 15th August 1944. 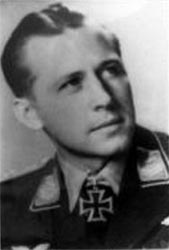