Wolfgang Ewald served with the Bundeswehr after the Second World War and there finally reached the rank of Oberstleutnant.

His final total of aircraft shot down reached 78.

Major Ewald has commanded the III./Jagdgeschwader Udet since the 22.07.1942. Previously he had participated in the French campaign as well as the air war against England. Then, from autumn 1940 to early 1942, he served as an Ia officer in the staff of Jafü 2. Due to his desire for combat service, he returned to the frontlines. Thus, at the beginning of the 1942 summer offensive, he returned to the Geschwader in order to familiarize himself with the unit before taking over the post of Gruppe commander.

Over the course of 276 sorties (including 49 over France and 62 against England) Major Ewald has achieved 50 aerial victories. Half of these victories were bombers. After completing his familiarization period he shot down 34 aircraft in a particularly successful annual quarter. In this same time period his Gruppe shot down 476 aircraft under his leadership, bringing its cumulative total of aviation kills to 1413. This total means that it continues to stand among the most successful Jagdgruppen.

Major Ewald took over the Gruppe at a time when it had been majorly weakened following the transfer of 6 Knights Cross holders. The lions share of its operational tasks thus fell to its younger pilots. Major Ewald was able to inspire them and lead them from success to success by taking on the mantle of a role model for them, one which was characterized by tireless devotion to duty and extraordinary bravery. His prudent and decisive leadership on the battlefield was in turn a significant factor that enabled him to keep the losses of the Gruppe as minimal as possible. He attacked heavily escorted Russian bomber formations with the same ruthlessness that possessed him while defending German bomber formations against enemy fighters, and great success was a consistent result in both types of missions.

When conducting bomber escort missions he frequently and willingly passed up opportunities to achieve aerial victories in order to focus on his primary mission.

Major Ewald has been the model of both a successful fighter pilot and a capable unit leader. Thus, on the grounds of his success in battle and his admirable personality, I believe him to be worthy of being awarded the Knights Cross to the Iron Cross. 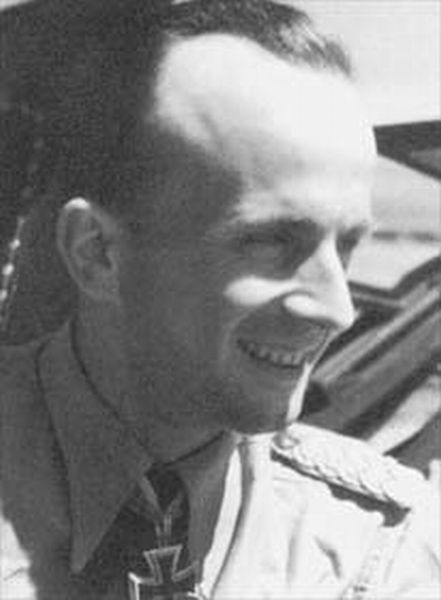