Friedrich-Karl "Tutti" Müller was born in Berlin Lichtenfelde on Dec. 25th, 1916.
At the outbreak of World War Two he served in 8./Jagdgeschwader 53 (JG) in the rank of Leutnant. May 27th, 1940 he scored his first victory in the air, a French Curtiss Hawk 75. During the French campaign he scored eight victories. During the Battle of Britain, he added two RAF aircraft to his credit. From June 1941 onwards he participated in the fighting at the Eastern Front. About September 1941 he had scored 20 air victories. In November he was promoted to Staffelführer 1./JG 53.
In the spring of 1942, the unit was transferred to Sicily in the Meditteranean. Over Malta he shot down three Hawker Hurricanes. In May the unit returned to the Eastern Front. September 19th, 1942, Müller claimed his 100th kill. November 1942 he was promoted to Gruppenkommandeur 1./JG 53 and he led his unit to Tunisia. Up to April 1943 he had made 115 kills. However, the stress overtook him and he was sent on leave. February 1944 he was made Gruppenkommandeur IV. / JG 3 in defense of the homefront. March 8th, 1944 he shot down three four-engined bombers, raising his tally to 122 kills. March 24th, he was posted as Geschwaderkommodore JG 3.
May 29th, 1944, in Salzwedel, Friedrich-Karl Müller lost his life while landing his Messerschmitt Me 109 G-6 (Wrk.Nr. 410827). At the time he was Kommandeur JG 3 in the rank of Major. He was promoted posthumously to Oberst.
In more than 600 opersational sorties, Friedrich-Karl Müller scored 140 kills including 23 four-engined bombers.
Career:
?: Flugzeugführer 8. / Jagdgeschwader 53;
November 1941: Staffelführer 1. / Jagdgeschwader 53;
November 1942  Febr. 14th, 1944: Gruppenkommandeur I. / Jagdgeschwader 53;
October 1943: Acting Geschwaderkommodore Jagdgeschwader 53;
Febr. 26th - April 11th, 1944 Gruppenkommandeur IV. / Jagdgeschwader 3;
March 24th, 1944: Geschwaderkommodore Jagdgeschwader 3.

Strong North American bomber units under fighter protection pressed into the area of Berlin during the midday hours of 18 April. In various locations damage and casualties among the population, especially in Rathenow, were inflicted. 44 enemy aircraft, among them 40 four-engine bombers, were shot down despite the difficult defensive conditions. A fighter unit under the leadership of Major Karl-Friedrich Müller distinguished itself in defense of these attacks by the destruction of an entire bomber formation. 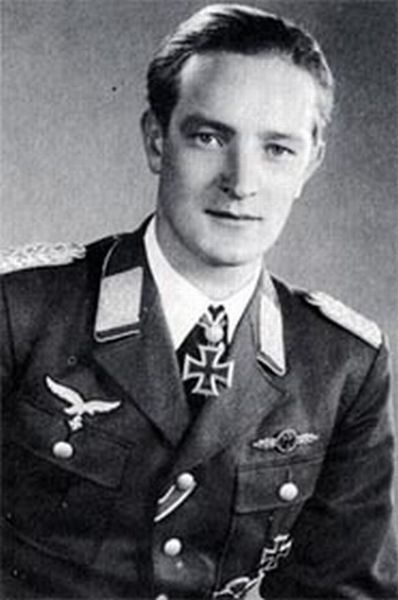 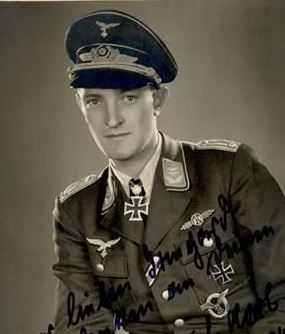