Awarded for his defense of an airfield north of Voronezh on the 24-25.07.1942. With his Batterie he was able to defeat the overwhelming Soviet breakthrough attempts, in the process of which his men destroyed 25 tanks, 3 aircraft and strong infantry formations. Of these, 18 were destroyed by Prentl himself who stepped in as a gunner after all but one of his cannons were knocked out.

Major Prentl has participated in the French, Eastern and Italian campaigns. Already during the French campaign he received both classes of the Iron Cross for outstanding personal bravery. From May 1942 to August 1942 he repeatedly distinguished himself through his daring courage during the assault and breakthrough towards the Don river. In the second great defensive battle for the Voronezh bridgehead on the 24-25.07.1942 Prentl and his Batterie destroyed 25 enemy tanks and 3 aircraft, of which (following the elimination of all other guns) Prentl himself destroyed 18 tanks as a gunner for the last remaining cannon. As a result of this superior bravery he prevented a decisive enemy breakthrough, and was as such awarded the Knights Cross on the 27.10.1942.

In January 1943, Prentl took over a Flak-Kampfgruppe that was encircled around Starobjelsk and led this group in a 4-week, 320 km long withdrawal involving continuous fighting through Izyum back towards Kharkov. Along the way the Kampfgruppe destroyed 12 enemy tanks, 41 anti-tank guns and 32 artillery pieces.

In September 1943 Prentl led a Kampfgruppe in the crushing of the Badoglio uprising in Italy. The results of this operation was the destruction/capture of 5 tanks, 6 anti-tank guns, 9 artillery pieces as well as 1 enemy General and 4000 men.

From January-March 1944 Prentl was employed as a Kampfgruppe commander at the Anzio beachhead. Here too the outstanding leadership of Prentl was clear for all to see. The successes of his Kampfgruppe, which included 40 enemy tanks destroyed as well as multiple infantry attacks smashed, were repeatedly mentioned in the Wehrmachtbericht. Following this mission, Prentl was ordered to personally report on the action to the Führer. During the retreat battles in central Italy his Kampfgruppe destroyed another 20 tanks and several infantry battalions.

All these successes are primarily due to the personal displays of bravery and steadfastness by Major Prentl. He has previously already been submitted for the Oakleaves twice, in February 1943 and March 1944 respectively.

On the 18.02.1945 Major Prentl took over the leadership of Flak-Regiment 116 (part of the 18. Flak-Division) in the Heiligenbeil area, and has proven himself here as well. Due to his extraordinary leadership abilities, honed by his wealth of rich experience, he was always able to conduct the operations of his unit in such a way that the greatest successes could be achieved with minimal loss even in the hardest battles. In a short time he won the full confidence of the Army units deployed in the same area, whose faithful support could always be counted on until the end of the fight. Particularly noteworthy is the personal bravery that Prentl demonstrated almost daily in his regular visits to the foremost guns, where he would spur his men to their greatest potential. This personal dedication and resilience is without doubt a leading cause of the multiple successes of the Regiment. Almost every task carried out by his subordinated battalions was personally reconnoitred by him, and so he was a major share of the extraordinary victories. Under the leadership of Major Prentl the Flak-Regiment 116 destroyed the following enemy materiel within the span of six weeks:

In recognition of the valour shown by Major Prentl in previous years, but especially for his personal courage repeatedly shown as a Regimental commander in the battle for the Heiligenbeil bridgehead (which decisively influenced the course of the battle), it is only fair that he be recognized with the Oak Leaves to his Knights Cross. I therefore request this award.
851st Award 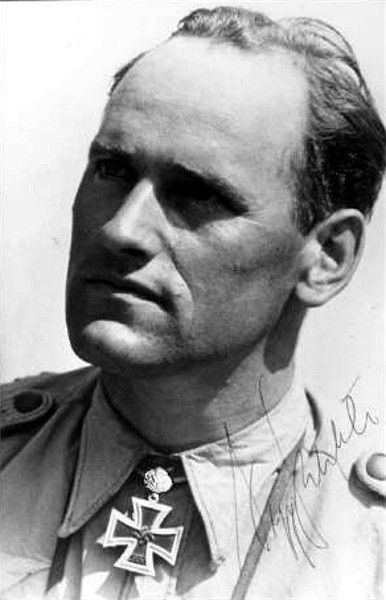