Volprecht Riedesel Freiherr zu Eisenbach joined the Kraftfahrabteilung 5 in January 1934. Soon he was transferred ot the Luftwaffe as Fähnrich and after his training he was placed with Kampfgeschwader 253 and later joined Kampfgeschwader 54.

After taking part in the Polish Campaign he and his unit acted in the campaign in the West. He was shot down on May 10th, 1940 in his Heinkel He 111P of 8. / Kampfgeschwader 54 by Hurricanes of No. 3, No. 85 and No. 607 Squadron during an attack at the Belgian Airfield Wevelgem. The plane crashed near Ruiselede. in the crash Obergefreiter G. Flehmer was killed, Eisenbach, Feldwebel W. Joest and Unteroffizier E. Kreib were taken POW by the Belgians. They were released after the Belgian Capitulation. After the fightings he was placed as Kommandeur II. / Kampfgeschwader 76 in 1941, with which he took part in the campaign on the Eatersn Front. Later he fought in the Mediterranean.
Riedesel Freiherr zu Eisenbach had conducted about 450 operational sorties when he was shot down with his Me 262 (B3+GL / Werk-Nr. 110802) on February 9th, 1945 at 3km East of Camberg near Idstein in the Hochtaunus. He was posthumously promoted to Oberst.

As Hauptmann operational from 28th June till 16th July 1942 during the summer offensive against Voronesh, operations in the Don bend against Kalatsch, above the lower Don towards the Caucasus. From 10th August bombardment operations against Stalingrad and the Caucasus.

By the time of his reception of the Knight's Cross he had flown over 250 sorties.

Awarded for his succesful command of the Me 262 refitted KG 54(J) as Kommodore. By this time he had flown about 500 sorties.
696th Award. 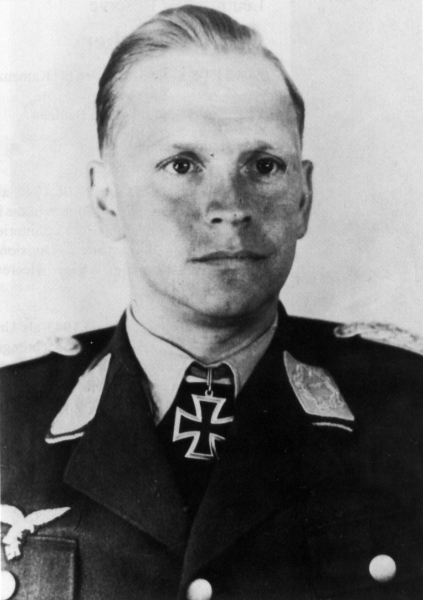