Gerhart Schirmer joined as a Lieutenant in September 1935 the Luftwaffe where he followed the pilot training course. In May 1939 he transferred to the Fallschirmjägers (Paratroopers) and was promoted to Chef der 6. Kompanie des Fallschirmjäger-Regiments 2. With this unit he took part in the invasion of Poland where they secured and hold a bridgehead over the river Weichel. In May 1940 Hauptmann Schirmer jumped during the invasion of the Netherlands in the area of Katwijk to conquer the airfield of Valkenburg. During the battle of the Balkan he jumped on April 26th 1941 near the Greek city of Corinth and after some heavy fighting they conquered the city and they took some 2100 British prisoners. For this action he was later awarded with the Knights Cross. Hauptmann Schirmer also fought on Crete, in Russia and Tunisia till he was promoted in May 1943 to Major and took over the command of the 5th Fallschirmjäger-Regiment. With this unit he fought in Italy till he was ordered in January 1944 to form a new Fallschirmjäger-Regiment. This became the 16th Fallschirmjäger-Regiment and as commanding officer of this unit he fought on the West and East front. He was taken prisoner in Berlin at the end of the war and was finally released in January 1956. In December of that same year Gerhart Schirmer joined the Bundeswehr and he retired as a Colonel in April 1971.

Following the capture of Corinth by German Fallschirmjäger, Hauptmann Schirmer took command of the II./Fallschirmjäger-Regiment 2 and set out in pursuit of the Allied forces in the Peloponnese. Nauplia was occupied, but en-route to Tolos the 6. Kompanie was ambushed by British forces. Despite rallying and beginning their own attack, in the difficult terrain the attack bogged down. In response Schirmer sent a messenger to the British forces, warning them that if they did not surrender they would be immediately crushed by Stukas and Panzers. The bluff succeeded and Schirmers men took the surrender of 1200 British troops and 72 officers. Schirmer then managed to capture the commander-in-chief of the Greek forces in the Peloponnese and secured their surrender, resulting in the capture of 9000 Greek and 2000 British troops.

Not long afterwards, on the 26.05.1940, Schirmer and his men would capture Hill 296, a height which overlooked the Heraklion airfield. This action would prove a most important step for the eventual capture of the city a few days later. For these achievements Schirmer would receive the Knights Cross.

Awarded for his leadership of the Fallschirmjäger-Regiment 16 during the battles in the centre of the Eastern front during the summer of 1944. Rushed to the VilniusKauen area starting on the 07.07.1944, the Regiment immediately became involved in a fighting retreat. As it was evading Soviet forces along the Neris river, it was overtaken and encircled on 13.07.1944. However thanks to the leadership of Oberstleutnant Schirmer the Regiment managed to break out and take up a new defensive position east of Kauen (Kowno).

Forced back by further Soviet action, the Regiment would make a stand in the Memel bridgehead at Tilsit. In the battle area between Schloßberg and Wilkowischken Schirmers Regiment (reinforced by the I./Fallschirm-Pionier-Regiment 21 under Major Witzig) was able to secure a significant defensive success and was consequently mentioned in the supplement to the Wehrmachtbericht of 25.08.1944. 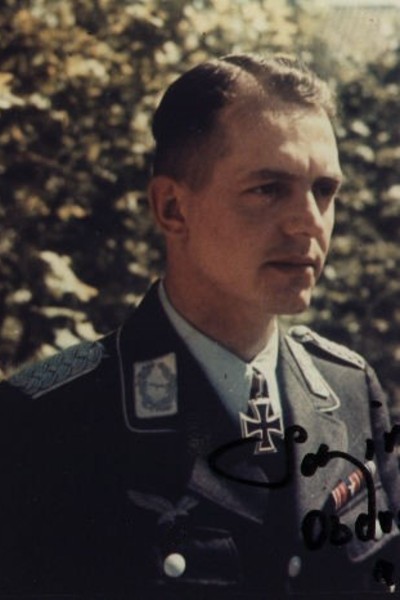