On the 13.10.1944 the Pz.Jg.Kp. 1299 (of the Pz.Jäg.Abt. 299) under the command of Hauptmann von Britzke was attached to the Gren.Rgt. 528, which was deployed in the left divisional sector. The left neighbour was the 6. Panzer-Division, and contact with this unit existed.

During the morning hours of this day, from the area northwest of Perzanowo, the Pz.Jäg.Kp. determined the presence of Russian tank movements in and southeast of Perzanowo. These observations were confirmed by the infantry. Hauptmann von Britzke thus ordered his Kompanie to take up positions between Perzanowo and Czerwonka in such a way that any westward attack towards or south of Czerwonka could be smashed.

Meanwhile the Russians had succeeded in breaking through the left neighbouring division between Perzanowo and Zalusie with strong infantry and tank forces, and these were now headed to Lipniki. This opened up a 5 km wide gap on the left wing of the 299. Infanterie-Division.

At this time Hauptmann von Britzke and his Kompanie were echeloned southeast of Czerwonka against an attack from Perzanowo. The commander immediately suspected the great danger on his left and immediately confirmed the situation with other friendly forces. He confirmed that the enemy forces that had broken through to the north had turned west, already reached the eastern part of Kolonia with strong forces and were now continuing in the direction of Czerwonka.

Hauptmann von Britzke clearly recognized that a large gap existed between the 299. Infanterie-Division and the left neighbouring division, and furthermore that a rolling up of both divisions fronts was to be feared as a result. He thus made the difficult decision to hold up and throw back the Russians in a counterattack with his Kompanie and an escorting infantry Zug despite the lack of any stronger friendly infantry forces. One Zug prevented a further enemy advance towards the Czerwonka church and tied them down frontally. Hauptmann von Britzke took the bulk of his Kompanie (without infantry support) and launched a swift, surprise attack into the enemys flank from the area south of Czerwonka towards Kolonia. He threw back the enemy in a short engagement while inflicting heavy losses, and then went on to retake Kolonia against a force of 2 enemy battalions and several assault guns.

The Zug positioned in Czerwonka immediately reinforced the swiftly advancing attack. The enemy was shaken by the energetic surprise attack from the flank and fled back to Lipniki in disorder. Hauptmann von Britzke immediately created a blocking position on the eastern edge of Kolonia as far as the left divisional wing north of Perzanowo. Over the course of the afternoon Hauptmann von Britzke bloodily repulsed two further strong tank-supported Russian attacks despite the lack of friendly infantry, holding his position with iron resolve until the evening.

Hauptmann von Britzke inflicted heavy losses on the enemy over the course of the day, including:

The victory on this day would not have been possible without the decisiveness, responsibility, skillful leadership and bold daredevilry by Hauptmann von Britzke or the efforts of his brave and dutiful Kompanie. Their actions prevented a major Russian breakthrough, sealed off the frontline gap between the 299. Infanterie-Division and 6. Panzer-Division and brought about heavy losses in men and materiel for the enemy. 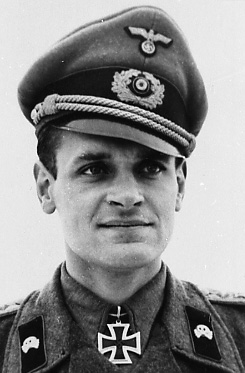