Heinrich-Walter Bronsart von Schellendorff was killed on 12th September 1944. At that moment he was Kommandeur 111.Panzer-Brigade with the rank of Oberst. He was posthumously promoted to Generalmajor.

Awarded the Knights Cross for distinguishing himself on the 16.07.1943 west of Brussny (in the Orel salient), on the 22.07.1943 near Kzyn and on the 23.07.1943 while northwest of Katunowka. During this latter action he and his regimental staff successfully engaged a Soviet Bataillon and subsequently launched a counterattack along the Katunowka-Inschinskaja road.

The following press article, dated 26.02.1944, describes why Bronsart von Schellendorff was awarded the Oakleaves as follows

Oberst Bronsart von Schellendorff was awarded the Knights Cross five months ago for his share in the fighting within the Orel salient. In more recent days he has been involved in the defense against overwhelming enemy forces north of Kalinkowitschi during January 1944. The enemy sought to crush the bridgehead there from the north and cut off the German troops located in the bridgehead. The Soviets repeatedly managed to push back and/or bypass Oberst Bronsart von Schellendorfs weak forces, which were deployed along a broad front in dense terrain. However the Oberst always managed to pull off operational decisions which, at the cost of the highest demands from the leadership and troops, brought about the possibility of reconstructing the front and holding open the retreat road until all units had succeeded in evacuating the bridgehead according to plan. Later on the Divisions retreat road was blocked by the pursuing enemy. Acting swiftly, the Oberst assembled a force consisting of elements of the divisional staff, the Nachrichten-Abteilung and self-propelled guns coming from the repair shop. Leading at the head of this weak motley of troops, he reopened the retreat road for the Division. 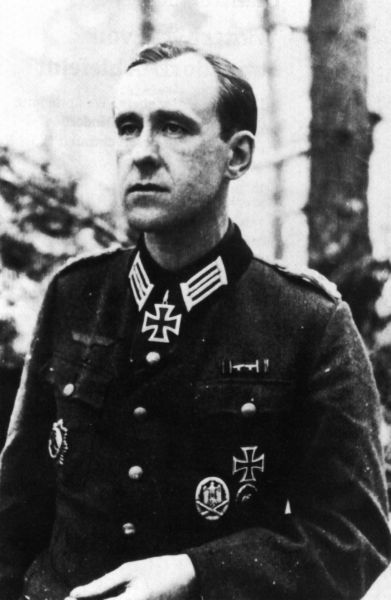