Rudolf Albust died of his wounds in a Lazerett in Saalfeld on April 9th, 1945.

Awarded for distinguishing himself during the defensive fighting in the Newel area on the 13.12.1943. The following press article (written by war correspondent Gotthilf Walter) provides a detailed account of his actions on this day

Knights Cross for an Obergefreiter from Saxony - Smashing an offensive operation as a Panzerjäger:

Early on a winters morning, at 07:00, the Soviets commenced an unprecedented artillery drumfire that would last for hours as a preparation for a major attack. Behind the Bataillon command post, atop of a bleak and snow-covered hill near the road, stood a 7.5 cm Pak gun whose gunner was Obergefreiter Albust. The entire gun crew hid in a bunker just 15 metres from the gun, bracing themselves against the dugouts soft walls as the earth shook around them. It was impossible to see the gun from this position. At 08:00 the fire subsided for just a moment. The Obergefreiter found his gun intact, stood in the trench and observed. But then the artillery shells once again approached over the rises and dips in the terrain, a crescendo that was both endless and terrifying. However the gunner stayed in his trench and waited.

They came. Tanks, tanks! cried the Obergefreiter to the bunker. But they continued to roll forward as black shapes across the hills, which themselves had been darkened by fire and earth. Behind them came the infantry, great masses of men that moved behind their tanks and over the positions of our Grenadiers. But then he had the first T-34 in his sights. He fired and the tank burned. One of the tanks turned its gun barrel towards him. Wait a moment, tanks! came the excited cry from a heavy machine-gun position just behind him as the second tank burst into flames. It lasted 20 minutes, but eventually all 6 tanks (5 T-34s and 1 KV-1) lay knocked out behind the rear position of our Bataillon. The enemy infantry then fled, and Obergefreiter Albust poured high explosive shells into them from his firing position. This single gun had delivered an imaginable amount of support for the Grenadiers One gun? No, just one man behind the cannon, the gunner!

On this day the Soviets had hoped to break through the road with a violently launched attack. But, instead, by the evening of this day the Regiment had succeeded in pushing the enemy infantry back past their burning tanks, past the holes made by their own drumfire and beyond the first line of defense. The frontline disposition was thus the exact same in the evening as it was on the morning of this day.

The commander in chief judged this deed favourably and without reservation. Then he presented this Thuringian bricklayer (who was born in a Saxon town near Zwickau) with the high award, tied the ribbon around his collar, shook his hand and took off his own hat to him. Obergefreiter Albust had served at his gun at a critical point along the frontline, one which the enemy had sought to break through by advancing across the torn-apart earth with their masses of men and materiel. Many awards have been given to this well-deserved Panzerjäger-Abteilung. But their Knights Cross Holder is just an Obergefreiter!

Albust was also recognized for having brought his total of destroyed enemy tanks to 24 by his actions on the 13.12.1943. The supreme commander mentioned in this article was Generaloberst Reinhardt (commander of the 3. Panzerarmee), who personally presented Albust with the Knights Cross on the 22.12.1943 at the command post of the Panzerjäger-Abteilung. 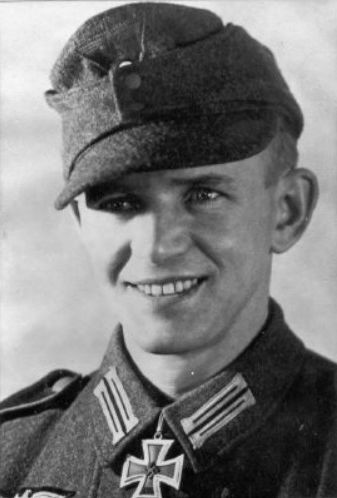