On the 22.06.1941 Generalmajor Allmendinger personally led his Division through a difficult attack near Lazdijai. He managed to reenergize the attack and ultimately bring about the capture of both Lazdijai and the commanding hill nearby. He subsequently led the Divisions Vorausabteilung as it strove to capitalize on this success, and under his personal leadership it managed to establish an important bridgehead over the Niemen river at Seirijai. The creation of this bridgehead was of great operational importance for the German 9. Armee, and Allmendinger would be recognized for his achievement with the award of the Knights Cross.

Awarded for the successes of his Division during the German offensive operation Michael (27.09.-09.10.1942). The goal of this operation was to broaden the German corridor to Demyansk. In the resultant combat Allmendinger displayed outstanding leadership, and his Division was heavily involved in the encirclement and destruction of strong Soviet forces southeast of Lake Ilmen (this success was reported in the Wehrmachtbericht of the 09.10.1942). 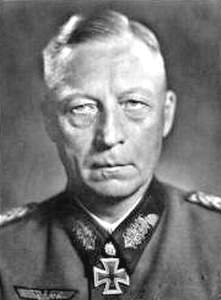