During late 1942 Oberst Andersen commanded the defense of an important strongpoint on the middle Don. This strongpoint was defended by one of his own Flak combat units as well as hastily assembled Heer units. In the fighting that ensued Andersen managed to hold onto this strongpoint with the forces at hand against powerful Soviet tank/infantry forces until friendly reinforcements finally arrived. 43 Soviet tanks were destroyed during the defense of this strongpoint, and its retention enabled the creation of a new German blocking position. Oberst Andersen himself would receive the Knights Cross for his defensive feat. 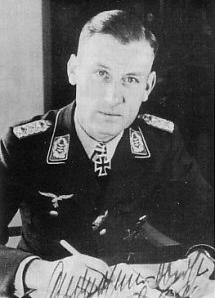