Karl-Heinz Bendert was born on 9 September 1914 at Schwiebus in Mark Brandenburg. After volunteering for the Luftwaffe in 1937, Bendert took the usual training to become a pilot. He was posted to Jagdgeschwader 27, based at Magdeburg-Ost as an NCO pilot. His first victory came on 12 May 1940 when he shot down an RAF Bristol Blenheim, north of Rotterdam and by September of that year his total had risen to six. Benderts tally of aerial victories rose only slowly thereafter.
It was not until he and his squadron were sent to North Africa in November 1941 that Bendert became particularly successful. He claimed his 10th victory on 22 May 1942. Thereafter, however, his success rate rose dramatically; having taken two years to achieve ten victories, he doubled this score on 4 August in just over two months. Only eight days after making his 20th kill, Benderts tally had risen to 30. On August 16 he shot down three Curtiss P-40 fighters, and only ten days after making his 30th kill, he shot down his 41th enemy aircraft on 22 August 1942. However, he became embroiled in a controversy over the falsification of his claims along with others in his unit. This did not preclude Bendert, by now commissioned as a Leutnant being awarded the Knights Cross on 30 December 1942 for 42 victories.

After returning to Germany, he had been re-assigned to non-combatant duties as a flying instructor with 2./Ergänzungs/Jagdgruppe Süd. This was not Benderts calling, however. In September 1943 he returned to II./JG 27, becoming Staffelkapitän of 5/JG 27 on 2 December. Apart from a detachment to Greece in 1943, and a brief but desperate spell in France after D-Day, the Afrika Geschwader spent the rest of the war based in southern germany performing home defend (Reichsverteidigung) duties. Bendert earned a considerable reputation as a destroyer of Allied four-engined heavy bombers. On 26 April 1944, Bendert was appointed Staffelkapitän of 2./JG 104. He recorded his last four victories with this unit in February 1945. When the war ended Karl-Heinz Bendert had been credited with 55 victories in 610 missions, including ten heavily-armed Flying Fortresses, which placed him in the leading ranks of the "Viermot killers." He survived the war and died in Oldenburg, at the age of 69.

The following press excerpt (dated 16./17.01.1943) describes why Bendert was awarded the Knights Cross

Oberfeldwebel Bendert shot down 42 British aircraft over England and North Africa as a fighter pilot. 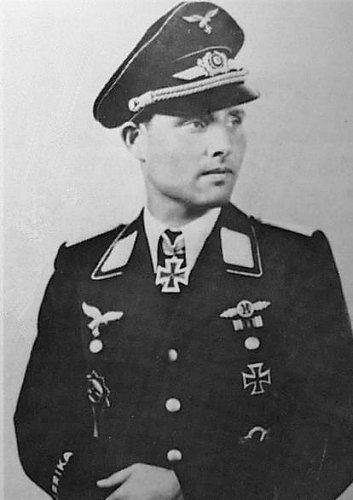