SS-Obersturmbannführer Bock has outstandingly distinguished himself as an Abteilung commander in the SS-Pol.-Art.-Rgt. during all offensive and defensive operations since the beginning of the Eastern campaign. During the hard winter fighting of the previous year he led a Kampfgruppe at the Volkhov river and smashed numerous overwhelming enemy attacks through the purposeful employment of his subordinated forces and the skilful direction of his Abteilungs fire. He has done so likewise at the end of this years January during operations at the Siniavino heights.

During the course of the positional warfare along the Newa river the Russians attacked from the Kolpino area along both sides of the October road at daybreak on the 10.02.1943. With their great superiority in men and materiel they succeeded in breaking through the positions of the 250. (span.) Infanterie-Division on their first attempt. The Russians then swiftly pushed ahead without encountering noteworthy resistance, crossing the October road and prosecuting their attack against the hilltop road StepanowkaMischkino. They already managed to reach this road at around 11:00.

Obersturmbannführer Bock correctly perceived the danger that a continued Russian drive would bring for the left flank of the SS-Pol.Div. He thus ordered his observation posts located in Feklistowo and Mischkino to prepare for close quarter combat and hold an important hill for the areas defense at any cost. This artillery blocking position was occupied under the direction of the commanders of the 4., 6., 12. and staff Batterien, and reinforced by the observation units of the Heer artillery. From the start it was defended with bravery and determination. In order to secure the left flank, Obersturmbannführer Bock allowed the friendly defensive line at Feklistiwo to refuse itself to the west in order to defend against the enemy forces coming from the west under any circumstances.

Repeated enemy penetrations at Feklistowo were cleaned up in immediate counterthrusts. When the first reinforcement unit (a cannoneer Zug) arrived at around 14:00 it was immediately dispatched to Feklistowo in order to ensure that the left flank held. Obersturmbannführer Bock ruthlessly placed himself amongst the fighting positions so as to positively influence the defensive combat. Only in this way was it possible for him to correctly employ the continual stream of reinforcements from the Division in the correct fashion.

Up until around 17:00 the following reinforcements arrived: A Pionier and baggage Kompanie from the SS-Pol.Div. These units were deployed to the left flank to close a wide gap between this position and the left neighbouring unit. Meanwhile the Russians brought up strong tank forces from the west and sent them in an advance along the hilltop road in the direction of Mischkino. This resulted in a partial wavering of the defensive front that had been so skillfully set up by Obersturmbannführer Bock. Feklistowo had to be given up due to the absence of available anti-tank weaponry for its defenders. However Obersturmbannführer Bock was also able to master this critical situation through the ruthless, determined and calm application of his person. He directed those forces that were fleeing from the tanks into a new defensive line along the western edge of Mischkinonorthern edge of Porkusi. As this was happening anti-tank weaponry was finally delivered to Mischkino, and these destroyed 2 enemy tanks that were on the Mischkino village road. The newly built defensive front was held.

The independent initiative shown here by Obersturmbannführer Bock enabled this hilltop road (of vital importance for any future defense) to be held despite the minimal forces at hand. This achievement created the necessary conditions for the Division to construct a new defensive position.

I therefore recommend Obersturmbannführer Bock for the award of the Knights Cross to the Iron Cross on the grounds of his phenomenal achievements in the defensive battle for this decisive strongpoint as well as his ruthless devotion to duty.

The quote refers to the Divisions participation in the II. SS-Panzer-Korps relief operations during the latter stages of the Falaise pocket battle. 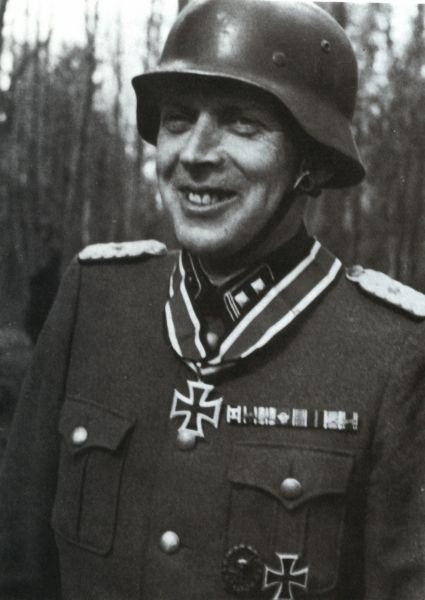