Adolf Borchers was born on 10th February 1913 in Wendhausen, near Lüneburg. He reported to the Jagdgruppe 88 "Legion Condor" as Unteroffizier in the fall of 1938 and took with this unit part in the Spanish Civil War. After returning to Germany he was placed with 2. / Jagdgeschwader 77 (later 10. / Jagdgeschwader 51), with what he took part in the campaigns in Poland, France and the Battle of Britain. During this period he shot down five enemies.
Untril the end of 1941 he managed to increase this number in the Soviet Union to 23 with 10. / Jagdgeschwader 51. On 8th October 1942 he was placed as Staffelkapitän with 11. / Jagdgeschwader 51. Towards the end of 1942 he had achieved 38 victories. In 1943 he married the famous woman skiist Christl Cranz.
On 11th June 1944, Borchers was appointed Gruppenkommandeur I. / Jagdgeschwader 52 and achieved his 100th victorie on 24th July. He became Gruppenkommandeur III. / Jagdgeschwader 52 on 1st February 1945.
The end of the war came on 8th May 1945 at Pisek/Brün, after which he and his fellow unit members were transferred to Soviet imprisonment by their American capturers on 24th May. He was not released until 1955.

After the Second World War, he and his wife started ad ski instruction school. Adolf Borchers died on 9th February 1996.

Adolf Borchers achieved a total of 132 victories in over 800 sorties.

Published in the Ehrenliste der Deutschen Luftwaffe on 20th October 1941. 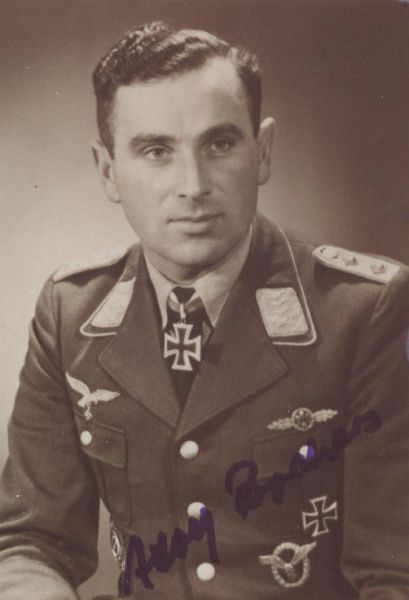