18.01.1945: reported MIA in Poland
named in the memorial book of the cemetery Stare Czarnowo - Glinna / Poland

On the 14.07.1942 the 3. Kompanie had another proud and successful day. On the evening before it had received the mission of blowing up the most important railway line still in the hands of the Russians. However the mission could not be carried out as the Kompanie had suddenly encountered 22 enemy tanks after it had shot up an enemy truck column during its advance. At that point the only way was back. For now we had to refrain from completing the mission, as there was no question of us going up against enemy tanks. But we didnt give up yet. The railway line had to be destroyed in order to prevent the heavy railway traffic and disrupt the Russian supply efforts. But how to do this? This thought occupied many of us during the night. On the morning of the 14.07.1942 the Kompanie once again received the order to strike westwards and try to approach and destroy the railway line. However we were to turn back if enemy contact was established in order to avoid casualties as much as possible. It was known that the enemy were still moving infantry and tanks through the 10 km wide area between the railway line and our forward positions.

We nonetheless set out. At 10:50 the command Panzer and five armoured vehicles allowed the I. and II. Züge to dismount along with best wishes for a safe return for all soldiers. 3 friendly Panzers from our Panzer-Regiment accompanied us to the forward security lines of our riflemen in order to provide short-range reconnaissance. As we were driving in the right direction, we continued to march onwards. Even though 1 Panzer had to stay back our fighting power was still significantly strengthened, as we now at least had armour-piercing weaponry.

We made swift initial progress along a ridgeway. Not even individual enemy stragglers could be seen. After a 6 km drive we could see the railroad, which lay in a broad river valley. Dust clouds revealed signs of movement on both sides of the valley. That was the enemy. We did not let this deter us however, instead we continued forwards while utilizing valleys and depressions to avoid coming into enemy sight. As our demolition unit entered into a large ravine, the forward Panzer suddenly hesitated. At the exit of the ravine, on the southern slope, was an enemy tank. Further observation revealed it to be a T-34. Even our own Panzers were powerless for the time being against this beast. Would this be the end of our forward march? Was the tank manned? These were the questions on our minds.

A foot reconnaissance revealed that the approach route to the enemy tank (whose gun was pointed southwards) was covered. The Kompanie commander, Oberleutnant Brandt, therefore decided to attack. Utilizing every bit of cover, our two Panzers moved forwards while the Züge followed behind at a distance. We got to within 80 metres of the tank without either of us seeing the other. Then it suddenly stood before us, with its turret still pointing southwards. Now only speed would decide the day. Covered by both friendly Panzers, Oberleutnant Brandt drove forwards with his SPW at top speed until he was within 5 metres of the T-34. Exiting his vehicle, he jumped onto the enemy tank with a concentrated charge, and the turret lay open. Unfortunately, he then determined that the enemy tank crew had already abandoned the fully outfitted and undamaged tank. He nonetheless destroyed the tank in order to prevent it from once again being used by the enemy.

It had meanwhile been observed that enemy tanks were proceeding towards the railway line from the opposite raised riverbank, about 4 km away to the northwest. A decisive question once again presented itself to the Kompanie commander. Should he pull back as per orders? Or should he push forward on his own initiative in full view of the enemy and try to destroy the tantalizingly close railway line which, as we saw, currently had multiple trains on it. Destruction of the railway line would temporarily deny the enemy any possibility of moving either troops or supplies, which would surely include the dispatching of new forces against our attacking troops. As such, the Kompanie commander decided to take the risk and destroy the railway line. The battle cry of the Kompanie was Get it done quickly!

With the command SPW forwards, we drove towards the railroad as fast as possible. We came to within 300 metres of the railway line without being disturbed by the enemy. The enemy tanks had not reckoned with such audacity, but they eventually began to open fire into our right flank. This was so accurate and concentrated that we had to give up our intention to thrust through to the railroad at the moment. While under enemy fire, we turned towards the south in order to seek some cover in a gully. We turned southwards under the enemy fire, and we had some luck, as all of us got into the gully safely. Only 1 Panzer received a hit in the motor, but it was still able to drive into cover under its own power. 3 SPWs then drove out of the ravine towards the railway line, while two other SPWs provided security to the north and south respectively.

We once again encountered enemy forces at the railway. Truck columns drove along both sides of the railway line, however these were scattered by our MG fire. But now the enemy forces in the village on the western side of the railway were alerted to our presence, and they shot at us with rifles and MGs. The enemy tanks also continued to bear down from the north, and these took us under fire. Covered by a stopped goods train, the SPWs of Feldwebel Gerhard, Feldwebel Knopke and Gefreiter Paatz continued to drive towards the railway line. Despite the enemy fire, the commander jumped out of his vehicle and blew up the rails together with Obergefreiter Lübeck, Gefreiters Doehring, Kalies and Schmidt and Pionier Malucha. The double track was blown three times along a 100 metre breadth.

The last detonation was barely over when all were once again in the vehicles and roaring away towards the east. The enemy tanks were hopefully not already in our rear. In order to answer this question, the commander drove forward to the nearest hill. He saw that the enemy armour was still stationary at the village entrance, and that the terrain before us was clear of enemy movement. With this all of us could breath a sigh of relief. First all the vehicles were gathered up. The damaged Panzer was towed away under the protection of an SPW Zug. The commander led ahead with the other SPW Zug in order to reconnoiter the way. The II. Zug then captured 11 prisoners in a cornfield, including an officer and a commissar. After two-and-a-half hours, we finally once again reached our forward infantry positions. Although the situation had been tense at times, we nonetheless thought well of our successful sally, especially since the operation had been carried out without any friendly losses despite the strong enemy resistance.

Bold initiative, daredevilry and the luck which all soldiers need at times were the guaranteers of the missions success, something which all us Panzer-Pionieren were aware of. However the best thanks for the successful deed came to us via the following radio announcement: Oberleutnant Brandt and his brave Pionieren are recognized and thanked for their outstanding achievement. Signed the commanding general, Freiherr von Geyer. 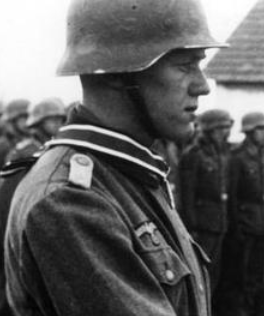