During the crossing over the Aisne river and canal on the 09.06.1940 it was Infanterie-Regiment 133 which, despite heavy losses, made the farthest southernmost advance of all units within the Korps. Through this it established the preconditions for the crossing of the rest of the Division and the creation of a bridge. This great success is first and foremost creditable to its brave commander, Oberst von Bünau, who provided a model of battlefield conduct for the whole Regiment. Bünau led the crossing over the Aisne from the foremost line with the main Bataillon, and he was personally involved in the battle to clear the bush covered island between the Aisne and the Canal with grenade in hand.
206th Award.

On war ribbon, with swords and star.

On the 05.03.1945 the Führer awarded the Oakleaves to the Knights Cross of the Iron Cross to General der Infanterie Rudolf von Bünau, commanding general of an Armee-Korps, as the 766th soldier of the German Wehrmacht to be so honoured.

During the combat for the upper Silesian industrial area the Soviets achieved a deep penetration in the front of the Armee-Korps led by General von Bünau. The commanding general launched successful counterattacks that managed to hold off the enemy long enough until he had created the preconditions for the withdrawal of his forces that were still in the industrial region and the creation of a new frontline to the southwest of this area. In 14 days the Soviets lost 129 tanks, 73 guns and over 4000 dead in the sector of Korps Bünau.
766th Award. 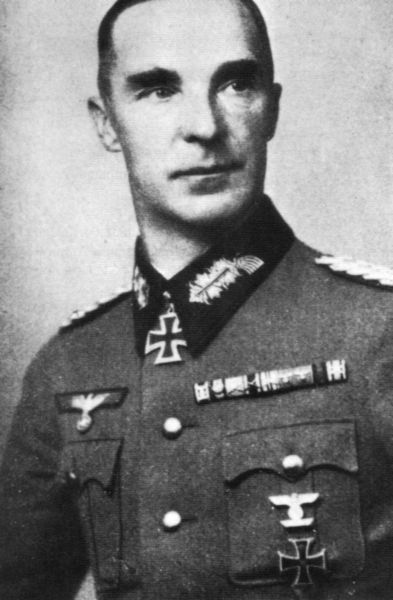