The Kuban Shield was instituted on 20 September 1943, to award the defenders who were fighting to preserve the Kuban bridgehead after 1 February 1943.

After the destruction of the German 6th Army in Stalingrad, the German forces were pushed further out of the Caucasus in the direction of the Kuban area in southern Russia. Hitler insists that the Kuban area must be defended at all costs. This was not only to keep an open route for the German units that were retreating over the straights of Kerch into the Crimea but also to be able to launch a new offensive into the Caucasus from this area. Therefore a resistance line was formed between the Sea of Azov in the north and the Russian Navy port Noworossijsk in the south. This area was defended with fierce resistance from 12-02-1943 until 04-09-1943, as unit after unit withdrew towards the Crimea. On 04-09-1943 came de order for all de defending German and Rumanian troops to evacuate the bridgehead and they withdrew across the straights of Kerch into the Crimea. It became impossible to hold on this bridgehead much longer. On 09-10-1943 the evacuation was completed and the Kuban fell to the Russian forces. To commemorate the fierce defensive fighting in the area, the names of the places where the most important battles were fought, were placed on the shield. This was Lagunen in the north, Krymskaja in the middle and Noworossijsk in the south.

The Kuban Shield was struck in sheet metal or zinc and treated with a bronzed wash. The shield has a slightly concave shape with a hollow backside. The top of the shield shows the typical Wehrmacht eagle with spread wings, that is clutching a wreath of laurel leaves in its claws. In the centre of this wreath is a mobile swastika placed. Underneath the eagle comes the shield design with a rounded point at the bottom. The wreath is flanked by the date 1943 with left of the wreath the 19 and right the 43. Underneath the wreath is a long box with the text KUBAN in it. Below this box is a broad zig-zag line placed, which represents the frontline of the Kuban bridgehead. Next to this line are the names of the places, where the most imported battles were fought. In the top stands Lagunen, in the middle Krymskaja and at the bottom Noworossijsk. At the backside is a supporting plate mounted with 4 pins and between these 2 parts is a piece of cloth placed. The colour of this piece of cloth depends on, in which Army branch the recipient served. This could be the Wehrmacht, Luftwaffe or Kriegsmarine. This piece of cloth is shield shaped and is significant larger, so it could be sewed to the left sleeve of the uniform. The supporting plate with the pins was covered with a piece of red brown coloured paper or a piece of cloth. This was to protect the uniform from the pins. It was for the recipient also possible to buy a (9mm) stickpin of this award. This stickpin could be worn on the civilian tunic.

The Kuban Shield was awarded in name of Generalfeldmarschall Ewald von Kleist and with the shield came a standard award document. The awarding was also noted in the Soldbuch. The shield was permanently worn on the left sleeve of the uniform and because of this there were multiple examples given to the recipient. It was also possible for the recipient to buy later new shields, this could in the official controlled LDO outlets. When the recipient owned multiple campaign shields, these could be worn underneath each other with 5mm space between them.

The criteria for receiving this shield were for the Wehrmacht:

For Luftwaffe and Kriegsmarine troops was a complicated point system used. 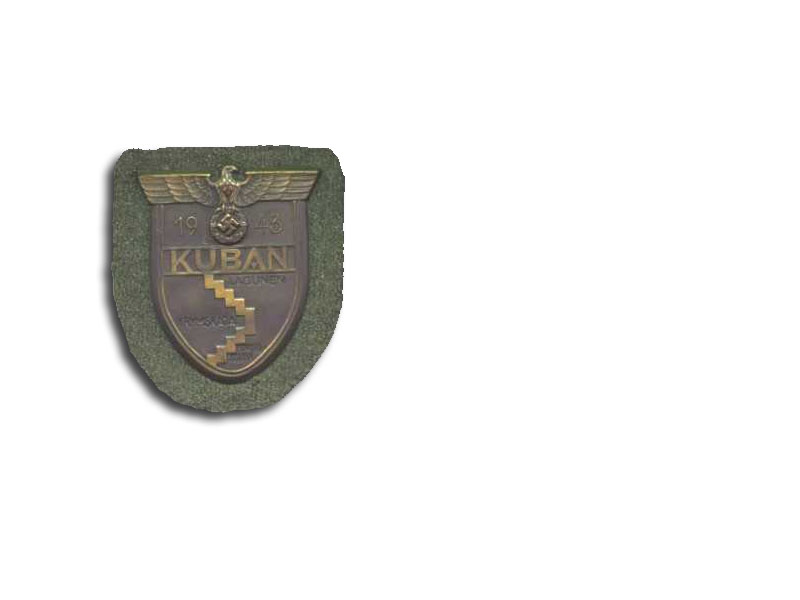