Since 1938 you could find a lot of different forms of Anerkennungs- or Erinnerungsurkunden (appriciation or commemorative documents) of many different German armies, corps, divisions, regiments and battalions, especially for good conduct and meritorious technical services in areas behind the lines or long boarder and guarding services.

This document for bravery was introduced as a new not wearable award September 6th, 1941 by Generalfeldmarschall Walter von Brauchitsch (1881-1948), then Oberbefehlshaber des Heeres or in English "supreme commander of the Army". The document was installed as "besondere Anerkennung für hervorragende Leistungen auf dem Schlachtfelde" or in English "particular appreciation for prominent achievements on the battlefield". It could be awarded to units or individual military for extraordinary bravery. The document was until December 1941 signed by von Brauchitsch and after that by Adolf Hitler (1889-1945), when he took over the office as Oberbefehlshaber des Heeres. The document was at first made in A5 size and after Hitlers taking over command, it was designed in a new way and made in size A4.
The awarding was registered in the Wehrpaß/Soldbuch and personal file, and it could even be awarded posthumously.

Altogether some 1,267 soldiers of the army and 35 of the Waffen SS got this award. And ca. 20 units achieved this document.

Anerkennungsurkunde des OBdH für im Ehrenblatt Genannte.
This document is exactly the same as the "Anerkennungsurkunde des Oberbefehlshabers des Heeres" or in English "appreciation document of the supreme commander of the Army", but was given to persons, who in addition were mentioned in the Ehrenblatt des Deutschen Heeres. The difference is only to be seen by the award date, which is the same as that of the naming in the Ehrenblatt des Deutschen Heeres and thus since January 30th, 1944 also of the awarding of the Ehrenblatt-Spange. 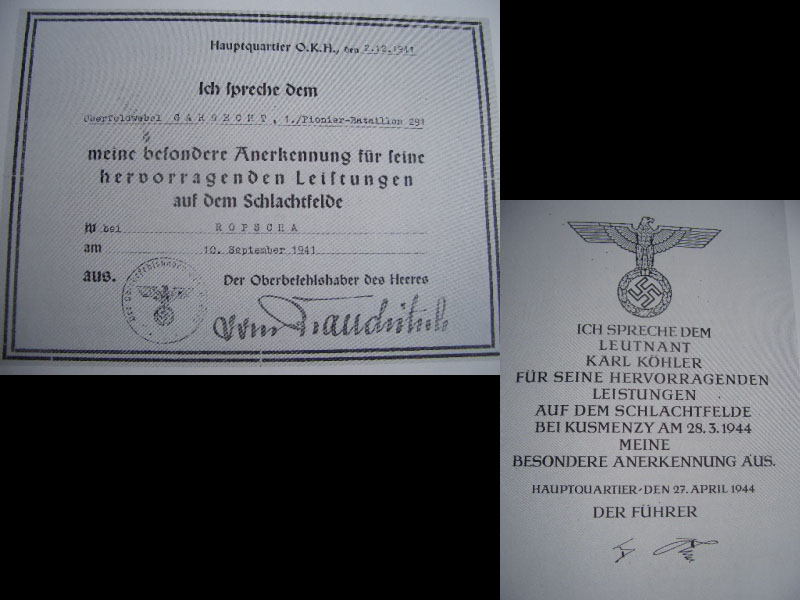