The Tank Combat badge, in German "Panzerkampfwagenabzeichen" was instituted on 20th December 1939 by the Oberbefehlshaber der Wehrmacht, Generaloberst Walther von Brauchitsch. It was designed by Ernst Peekhaus from Berlin and was authorized for officers and enlisted men attached to armoured units from the date of 1st January 1940. One year later the name was changed into "Panzerkampfabzeichen". The recipient needed to have served either as tank commander, tank driver, tank gunner or tank radioman for a minimum of three tank battles on three different days. The decoration could be authorized by the Commander of the Panzer-Division. From 9th September 1942 it could also be authorized by Commanders of battalions.

Initially the badge was only presented in silver. A bronze version was authorized for members of Panzer-Grenadier regiments, medical personnel operating in armoured vehicles and personnel assigned to armoured cars on 1st June 1940. Here the recipient had to have participated in three fights with his weapon or armoured car on three different days. When on 22nd June 1943 the higher grades were instituted by Adolf Hitler, the silver version were only to be awarded to tankcrew in tankunits and the bronze version for tankcrew in Tank reconnaissance units. Crewmembers of Sturmgeschützeinheiten, Sturmpanzereinheiten and Panzerjägereinheiten in Panzerjägerabteilungen could now only receive the "Allgemeine Sturmabzeichen". 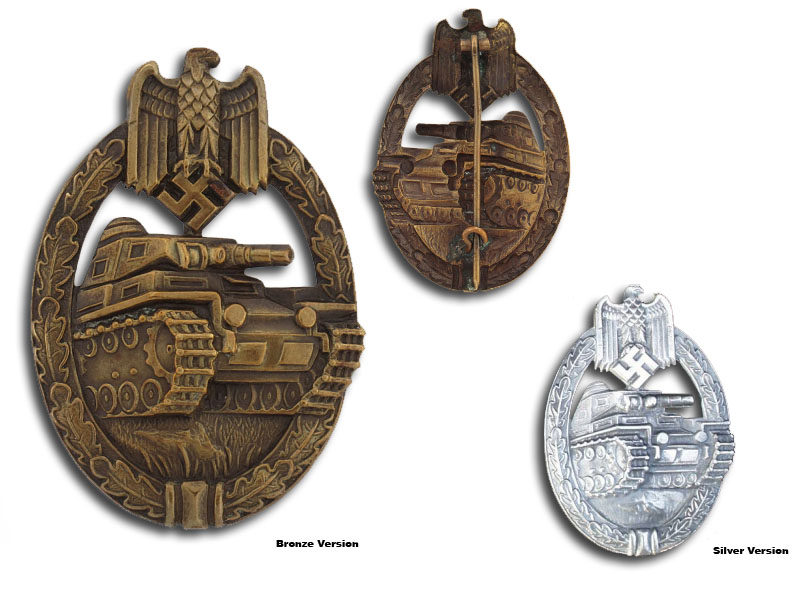