Panzer-Aufklärungs-Abteilung 116 was deployed as the Vorausabteilung during the breakthrough attack through the American front in Luxembourg.

During the assault on Heinerscheid the commander of the point Kompanie was wounded and became a casualty. The already difficult attack of the suddenly leaderless Kompanie was now thrown into jeopardy. Leutnant Auert immediately recognized this danger, but he also saw the opportunities being presented at the moment. He placed himself at the head of this unit and managed to overrun the enemy with magnificent attacking spirit.

After this he was given leadership of the Kompanie, and in the subsequent engagements he showed himself to be an outstandingly brave, flexible and energetic leader.

He particularly distinguished himself during the battle of Buret. On the 18.12.1944 the Abteilung become bogged down in the forested terrain to the east of the village. The village had a strong enemy garrison, and the Abteilung received fire from all manner of weapons. Without being dissuaded by the terrain difficulties or enemy resistance, without orders, and without waiting for the support of heavy weapons, Leutnant Auert decided to attack on his own initiative. He placed himself at the head of his Kompanie, drove into the enemy with inspirational courage and dismounted right in the middle of the hostile position. The Americans were totally surprised by the lightning-swift attack, and by firing all weapons it was possible to wreak terrible carnage on the enemy. This bold coup-de-main succeeded, and all who were not killed or taken prisoner fled the village in a disorderly rout towards the west.

During this attack Leutnant Auert succeeded in definitively proving his outstanding personal bravery, ruthless devotion to duty and inspirational leadership. Here he eradicated a great danger for his Abteilung and opened up the way for the continued breakthrough by both the Vorausabteilung and the Division as a whole.

His men were motivated by the steadfastness and exemplary willingness of their commander, and they continued to rack up outstanding successes in the continued advance. Not only here, but also in the hours of deepest crisis, he was a true leader for his Kompanie. He repeatedly supplied them courage and backbone through his exceptional confidence and clear leadership.

Leutnant Auert was badly wounded on the 27.12.1944 while leading a bold counterattack at the head of his Kompanie. 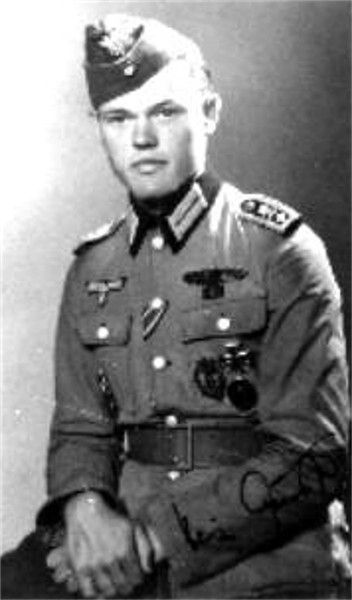