Joined in 1940 as a Schütze of the 2. Ersatz-Kompanie des Schützen-Ersatz-Bataillons 12.
From there he was transferred in 1940 to Schützen Regiment 12, Schützen Regiment 33 and 1941 to Schützen Regiment 304.
During this time he was within his Unit as an occupation force in France and took part in securing Greece.
After his transfer to Schützen-Ersatz-Bataillon 2, he attended the 8th Officer-candidate course at the tank troop school in Wünsdorf.
In 1942, he became a Zugführer in the Schützen-Ersatz-Bataillon 2, from there he was ordered as an orderly officer to the I. / Panzer Grenadier Regiments 304.
There he was wounded in 1942 and came to the company after his recovery in 1943-
Leader course at the School for Rapid Troops in Paris.
He then becama an orderly officer in the Panzer Grenadier Regiment 25 and in January 1944 took over the position of Adjutant in the I./(gep.) Bataillon of the Panzer Grenadier Regiment 25.
As a result, he was appointed Führer and then Chef of the 1. Kompanie of the Panzer Grenadier Regiment 25.
As the enemy attacked the 12. Panzer Division in the evening hours of the 20th September 1944 west of Doblen, this attack was broken in the sector of the division near Rüngas and Oberleutnant Altermann proved personal bravery at the head of his company and thus contributed to the success of the defense and was severely wounded in action. As an Oberleutnant and Chef of the 1./ Panzergrenadier Regiment 25, he received on October 4, 1944 the Knight's Cross.
After recovering from his wounds, he was appointed to the Panzer-Grenadier-Ersatz-Bataillon 5 in Szczecin. 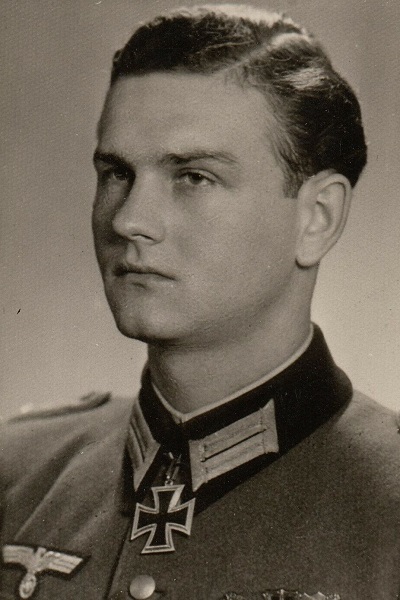