2.) After midnight on the 01.03.1945: Close combat with hand grenades against an enemy force advancing towards a friendly gun position following a heavy artillery bombardment of their own. Subsequently shot at an enemy flamethrower tank, which pulled back. 3 hours later he participated in an immediate counterattack with Bataillon Lorenz against a broken-in enemy. The old frontline was restored, and 21 prisoners were taken.

3.) Around 15:00 on the 01.03.1945: Prevented an enemy breakthrough southwest of Weeze, specifically near Kampbeekshof and Truebshof. Destroyed 2 tanks in armoured duels, whilst also delivering the killing blow to another tank that had been immobilized by a howitzer.

4.) 02.03.1945: Defeated an armoured attack against Kevelaer, during which he destroyed 3 tanks. Enemy truck-borne infantry subsequently fled back to Weeze.

5.) 03.03.1945: Prevented an enemy breakthrough with armoured cars against Kapellen. 1 tank and 1 armoured car were destroyed.

6.) 04.03.1945: Enemy tank attack with infantry support against the road KapellenSonsbeck. Smashed this enemy thrust by destroying 1 Cromwell and 1 Sherman as well as the escorting infantry. Due to this setback the enemy did not launch any more major attacks in this same location.

7.) 05.03.1945: Enemy tank attack from Hamb in the direction of Metzkath. Destroyed 1 Sherman tank northeast of Hamb in a tank duel after advancing forward to an exposed firing position. Defended against subsequent enemy pressure with infantry, and supported the defensive battle against both those enemy troops that had penetrated in the right flank of the frontline as well as those advancing against his own sector. Received orders at around midday to disengage and intervene in an even more critically threatened sector located northeast of Issum. However this resulted in overwhelming enemy pressure in his old sector and a deep penetration in the right flank that was aimed in the direction of Metzkath. The Sturmgeschütze were thus sent in for an immediate counterattack. However by this time the enemy had reached good positions, with their tank forces in particular having secretly occupied ambush positions around Regimental command post 22. It was only thanks to the actions of the Sturmgeschütze that the enemy was halted and the Regiment permitted to disengage without major losses. In this time Deutschs Sturmgeschütz destroyed a Churchill tank that had previously fired on him from an unspotted ambush position.

8.) 06.03.1945: Tank battles around the Bönninghardt airfield. Enemy advanced against the IssumAlpen road with 7 tanks despite the presence of friendly Sturmhaubitzen. One of these Sturmhaubitze was knocked out and completely destroyed. Deutchs Zug was thus dispatched to the area with orders to halt the enemy advance. Leutnant Deutsch did an excellent job of conducting this attack, with the result that he was able to swiftly destroy the two leading (and hitherto most successful) enemy tanks despite heavy artillery fire on his own firing position. This in turn robbed the follow-on enemy tanks of the desire to prosecute their attack at this position. Thus, despite the presence of strong enemy forces here, this section of frontline was held for the entire day (something which wouldve been impossible under other circumstances). The result was that it was possible to establish a new frontline on the village edge of Alpen without interference during the following evening.

9.) 09.03.1945: Was able to repair his shot-up aiming device in a remarkably short time, an outcome attributable to his unshakeable drive. When this was complete he immediately rejoined the fighting in order to support friendly troops that were being forced to pull back due to the strong enemy pressure. His intervention here prevented the imminent collapse of the frontline, and bought enough time for the creation of a new frontline. In the process he destroyed a Churchill tank at a range of 800 metres.

During all of these engagements Leutnant Deutsch was the unflinching soul of the resistance in each of his battle sectors. All of his 17 armoured kills (including 1 armoured car) invigorated the resistance of the defending Jäger, primarily due to the fact that most of these were achieved at the time of greatest need for the infantry. His successes against such numerically superior and yet tactically proficient enemy forces are a testament to both his fearlessness in battle as well as his own battlefield skill as a Sturmgeschütz commander. He thus has a significant share in the overall achievements of our forces in the entire sector of combat.

Heinz Deutsch was cited to receive the Deutsches Kreuz in Gold on March 5th, 1945, but received the Ritterkreuz zum Eisernen Kreuzes. 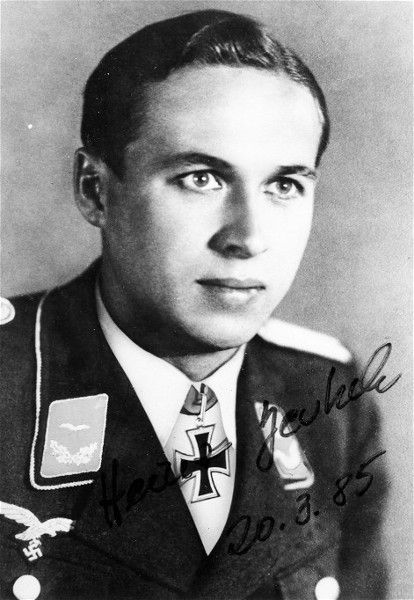