Oberfeldwebel Dipberger, combat observer in the crew of Kommodore and Oakleaves Holder Oberstleutnant Hogeback, has so far outstandingly distinguished himself over the course of 337 combat sorties. These are broken down into:

Here follows a summary of his achievements prior to the award of the German Cross in Gold:

Oberfeldwebel Dipberger flew in 264 operations, during which he

1. Scored a hit on a cruiser in the harbour of Malta,
2. Scored a direct hit against a 3-4000 GRT freighter in the Mediterranean on the 30.04.1941,
3. Scored multiple directs hits during a deep strike against a tank assembly area near Tobruk on the 15.05.1941,
4. Scored direct hits against an ammunition dump in Tobruk, which caused 16 major explosions,
5. Scored a direct hit against a British tank assembly before Sollum on the 17.06.1941,
6. Scored hits against field positions, artillery positions and armoured fortifications during rolling attacks against Fortress Sevastopol. Particularly noteworthy was the high number of missions he flew on a daily basis (as many as 8-10 per day).

Here follows a summary of his achievements after his award of the German Cross in Gold:

Oberfeldwebel Dipberger flew in 107 operations, during which he

During all of these operations the crew was consistently employed as the flight leader, target finder or marker. Oberfeldwebel Dipbergers achievements are therefore all the more compelling when this is taken into account. His skill and bravery contributed massively to the success of this crew, whose commander is an Oakleaves Holder and whose gunner (Leutnant Glasner) and radio operator (Oberfeldwebel Lehnert) are both Knights Cross Holders.

Among the appendices in this recommendation includes a summary of Dipbergers achievements up to date, which reads as follows

Successes prior to being awarded the German Cross in Gold:

- Struck a hit against a cruiser in the Malta port
- Set afire a 4000 GRT ship in the Tobruk harbour
- Damaged a 12000 GRT ship off the coast of Sidibarani through a direct hit
- Destruction of an ammunition dump near Tobruk
- Direct hit against an armoured battery before Sevastopol
- 1 coasting vessel heavily damaged in the Black Sea via a direct hit
- 3 direct hits against materiel dumps, which caused great fires and explosions

Successes after being awarded the German Cross in Gold: 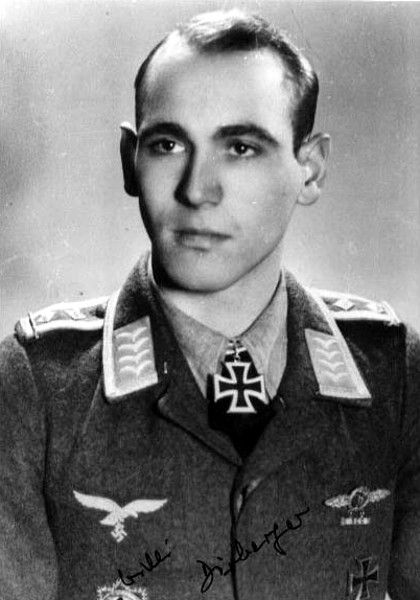