Awarded after flying over 200 sorties and achieving 7 aerial victories with his He-123. He also achieved a number of notable successes with his Staffel as a whole. On the 24.06.1941 he and his Staffel attacked a group of 30-40 enemy tanks south of Grodno that were attacking from Sokolka into the flank of German troops that were in turn attacking from Kuzniza. Druschel and his aircraft claimed to have destroyed 11 enemy tanks on this day, and managed to force the enemy to break off towards the south. Druschels Staffel would later achieve another notable success on the 06.07.1941. On this day they saved the Ulla bridgehead by smashing enemy forces around the Lohwsa train station and Gubiza.
283rd Award.

Awarded for further individual and command achievements during operations at Kertsch, Sevastopol and the Caucasus. By this time he had flown over 600 sorties. A particularly notable success took place on the 12.06.1942 when he destroyed an ammunition train along the Kharkov-Kupyansk railway (about 60 km ESE of Kharkov itself).
118th Award.

Awarded for his flying over 700 sorties as well as the great successes of his Gruppe at Voronezh, Rostov, along the Don and at Stalingrad.
24th Award. 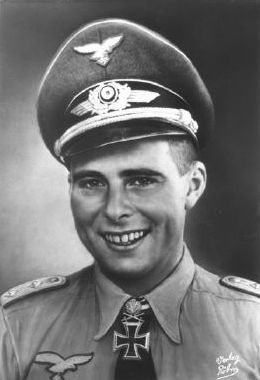