On the recommendation of the Supreme Commander of the Luftwaffe, Reichsmarschall Göring, the Führer has awarded the Knights Cross of the Iron Cross to Oberfeldwebel Haupt, pilot in a Kampfgeschwader. Oberfeldwebel Karl Haupt, born on the 04.06.1916 in Leipzig, has shown himself to be an outstanding bomber pilot in more than 350 sorties over the Balkans and the Eastern front. He achieved his successes through extraordinary bravery and ruthlessness.

During attacks against 12 occupied train stations he destroyed 22 transport trains. Furthermore he has destroyed 55 trucks, a munitions train and 3 large fuel dumps. Strong enemy fighter and anti-aircraft defenses were unable to prevent him from carrying out his missions. Oberfeldwebel Haupt is the son of an innkeeper and currently holds the profession of plumber. He received the German Cross in Gold in September 1942. 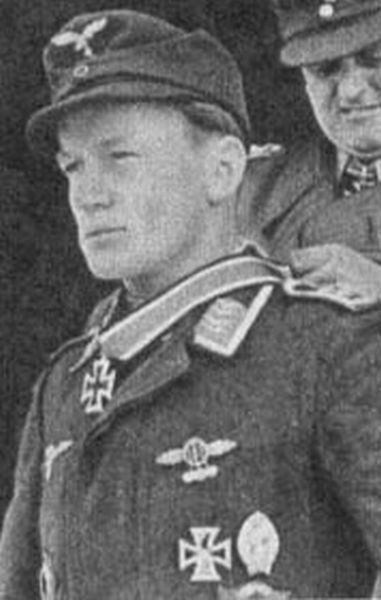