Received his award for defusing several parachute land mines near the Roding River in London, Great Britain.
--
"Sub-Lieutenant Miller commandeered a canoe and having put this on a fire-float with the UXB kit, he and Tuckwell ventured out into the river. They then left the River Fire Service fire-float and went on in the canoe, until they sighted the black rim of the mine which was stuck in the mud by the nose.

Tuckwell refused Miller's suggestion that he should retire to a place of safety. He pointed out that as Sub-Lieutenant Miller would be working under at least a foot of water he would need someone to hand him the tools. They managed to get out one fuse, but could not reach the other, so appealed to several crane-drivers who had come to see what was happening, and they at once volunteered to help. The two experts got back into the water, put ropes round the mine, and with the assistance of the crane-drivers, the huge cylinder was dragged slowly out of the creek, over the muddy bank and up on to the wharf. The final stages of the operation were then completed." 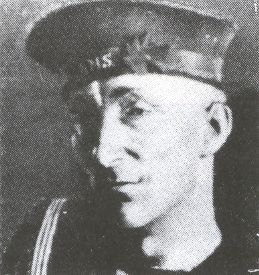