The following report from the Heidelberger Neuesten Nachrichten, dated 05.01.1944, describes why Ebinger would be awarded the Knights Cross

The enemy landed with strong forces in the harbour area of Noworossijsk on the 10.09.1943 under the cover of darkness. It was thus imperative to throw this force back as soon as possible before it created a sufficiently large bridgehead for the execution of further operations. A Kompanie of Württemberg-Baden Gebirgsjäger was dispatched to this place for a counterattack. However the Kompanie commander became a casualty just as this was beginning. The Kompanie HQ squad leader, Oberfeldwebel Edwin Ebinger, immediately took over the leadership of the Kompanie.

It turned out that the enemy had far greater numbers and were occupying strong positions. Moreover the Sturmgeschütze that were supposed to support the attack of the Kompanie were not operational. Under these circumstances an attack offered little prospect of success. However Ebinger decided to nonetheless carry out the attack on his own responsibility (contact with the Bataillon did not exist at the time). He and his Jägern stormed against the enemy position, rolling up trench after trench and clearing out bunker after bunker in close combat. Almost totally alone (the bulk of the Kompanie only covered his flanks and rear) he penetrated ever deeper into the Soviet defensive network.

Time was short, the onset of night threatened to overtake them. Ebinger knew that he had to have completed his task by then, otherwise the enemy would land new forces in the bridgehead during the night and make any further fighting by his small unit truly hopeless. The Oberfeldwebel and his men continued their attack with wheezing lungs, having declined to take any respite. Even the onset of night did not result in the cessation of hostilities. It was already getting dark when Ebinger finally stormed the main strongpoint of the Soviets, a heavily defended factory facility. This resulted in the bulk of the Soviets in this sector being cut off from the beach. 92 prisoners and over 200 dead Bolsheviks were later counted by the Kompanie on this evening. Thanks to the bold deed of Oberfeldwebel Ebinger it was possible to eliminate the remaining enemy forces in the western part of the Noworossijsk harbour area on the following day. Oberfeldwebel Ebinger himself would be awarded the Knights Cross to the Iron Cross for this action.

Oberfeldwebel Ebinger will turn 30 years old on the 13.01.1943. He was born in Wiesenbach, District Heidelberg. 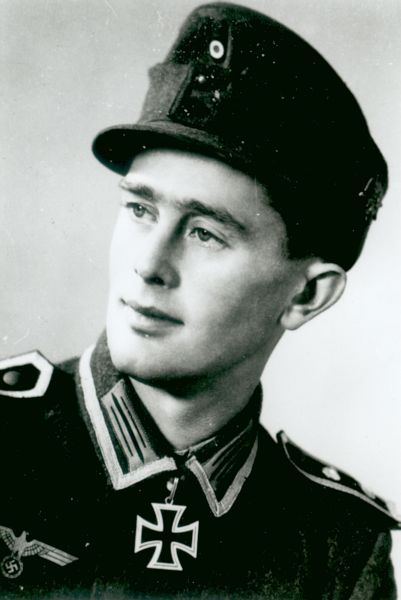