Obergefreiter Schrems was a squad leader in Geb.Jäg.Rgt. 85 during the fighting in Italy in summer 1944. On May 27 Schrems contributed greatly to the successful defense of his unit when it came under attack by Allied tanks. An estimated 25 enemy tanks attacked Schrems group, which consisted of only 24 Gebirgsjäger and an anti-tank gun. The gun was quickly knocked out, leaving the remaining German soldiers in a very bad situation. As enemy tanks began to approach, Schrems left his position to attack individual allied tanks three times and eliminated them with Panzerfausts (one of which was destroyed at a range of only 15 meters). For his boldness that day he received the Knights Cross. 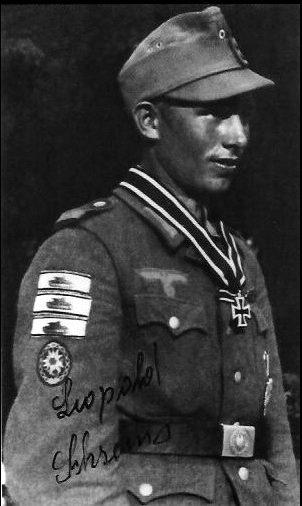