James Rocco Zarillo was born in Orange, New Jersey. He was the eighth out of ten children born to southern Italian immigrants. His best friends growing up were Biaggio Uricoli and Frank Manganelli.
James (who went by "Jimmy") also had an older brother Joseph (1918-1986) who was a paratrooper with the 456th and 463rd Parachute Field Artillery Battalion during World War II. His younger brother, Rocco (1930-2010) served as a paratrooper with the 82nd Airborne during the Korean War. A cousin, Joseph P. Zarillo (1925-1945) was Killed in Action while serving with the 99th Infantry, U.S. Army during World War II.

Citation:
"For extraordinary heroism as a light machine gunner serving with the Third Battalion, Twenty-Fourth Marines, FOURTH Marine Division in action against enemy Japanese forces during the battle of Namur island, Kwajalein Atoll, Marshall Islands, 1 February 1944. Directed to bring the fire of his gun on a hostile pillbox which had pinned down his assault team in an exposed position in front of the lines, Private First Class Zarillo attempted to carry out these orders but, due to the nature of the terrain, was unable to fire effectively on the enemy emplacement. With utter disregard for his own personal safety, he took his machine gun in his arms and daringly launched a lone attack against the Japanese position, destroying it before he was fatally wounded. Private First Class Zarillo's valiant spirit of self-sacrifice and extreme bravery were in keeping with the highest traditions of the United States Naval Service. He gallantly gave his life for his country."
Serial 2540 (May 31, 1944). 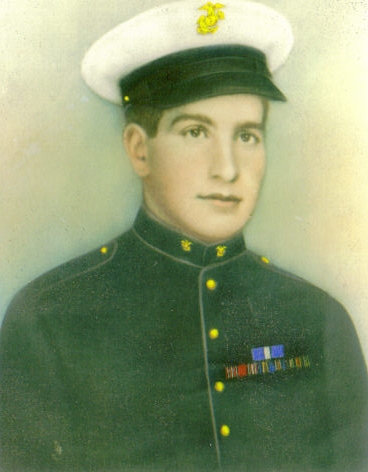