This made the medal not very popular. Most servicemen regarded it as a minor decoration.
The Navy Cros was made retroactive till April 6th 1917. On August 7th 1942, the Congress upgraded the medal and placed it directly under the Medal of Honor. It then became a combat-only recognition.

The Navy Cross was designed by James Earl Fraser. Through the years it knew some differences. The medal itself has always been the same. It is a three part construction. The cross and the front and the back of the medallion are struck separately and soldered together. The earliest version (1919-1928) wears a ribbon with a very narrow white stripe on the blue cloth. The medal has mostly a dull, greenish bronze colour. The later issues (1928-1941) have a more custom .5" white stripe on the ribbon and are of a more darker, gunmetal bronze.
The cross is designed as a modified cross that measures 1,5 inches wide. The ends of the arms are rounded. On each re-entrant arms of the cross can be found a bunch of laurel leaves with berries to represent achievement. In the centre is depicted a sailing vessel on waves, sailing to the left. The ship is a so called Caravelle, symbolic for sailing ships of the 14th century.
The reverse bears crossed anchors of the pre-1850 period, with attached cables. In the mid can be found the letters USN.
The ribbon is in Navy Blue with a white stripe in the center, to represent the Navy service and the purity of selflessness.

The Navy Cross may be awarded to any person who, while serving with the Navy or Marine Corps, distinguishes himself in action by extraordinary heroism not justifying an award of the Medal of Honor. The action must take place under one of three circumstances: while engaged in action against an enemy of the United States; while engaged in military operations involving conflict with an opposing foreign force; or, while serving with friendly foreign forces engaged in an armed conflict in which the United States is not a belligerent party. To earn a Navy Cross the act to be commended must be performed in the presence of great danger or at great personal risk and must be performed in such a manner as to render the individual highly conspicuous among others of equal grade, rate, experience, or position of responsibility. An accumulation of minor acts of heroism does not justify an award of the Navy Cross.

Replicas are almost without exception struck out of one piece instead of the original three piece construction. During the years 1941-1942 a variation was seen that was nicknamed "Black Widow" with a blackened finish of the medal. Most of these awards were awarded posthumously. From the mid of World War Two the more original dull bronze finish was once more adapted. 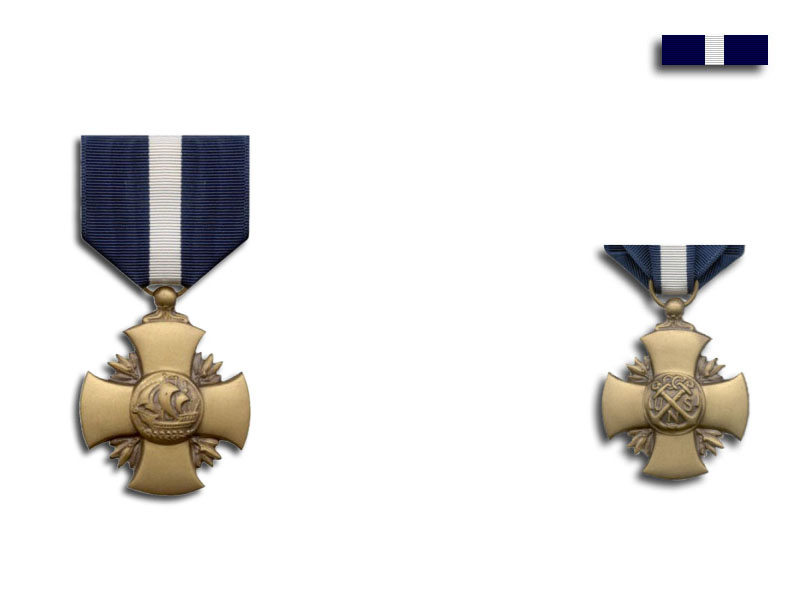