The Bronze Star Medal was officially instituted by Executive Order 9419 on February 4th, 1944. It was based on the idea of Colonel Russell P. "Red" Reeder in 1943. He had launched the thought that it was good for the morale of the military when there was a decoration that could be awarded by Captains of a Company or Battery to the personnel who served under their command. Colonel Reeder saw this medal as the ground version of the Air Medal and first introduced the name "Ground Medal". At first the decoration was to be instituted with the U.S. Navy to be given to ground and surface personnel for heroic or meritorious deeds. For unknown reasons the institution did not occur. The idea was picked up by General George C. Marshall who wrote a memorandum to President Franklin D. Roosevelt. The president instituted the medal the very next day.

The decoration could be awarded to any military who, serving within or together with the army of the United States after 6th December 1941, decorating himself by heoric or meritorious deeds as military, not participating in air operations, during military operations against an armed enemy or during an armed conflict in which the United States was not participating as a beligirent. The decoration could be awarded for the discribed heroic actions, not sufficient to be awarded the Silver Star or for meritorious actions or meritorious acting of service, which did not qualify for the awarding of the Legion of Merit. In 1947 the possibilities for awarding were enlarged. From that moment on the medal could also be awarded to any member of the United States Army that were mentioned in orders after December 6th, 1941 or who had received a certificate for exceptional service in goundbattle against an armed enemy between December 7th, 1941 and September 2nd, 1945 or whos merit could be proven by documents dated before July 1st, 1947. This made it possible to award the Bronze Star to any person who had received the Combat Infantryman Badge or the Combat Medical Badge.
The Bronze Star can also be obtained by veterans or next of kinn. Military that took part in the struggle on the Philippines between December 7th, 1941 and May,10th 1942 could receive the medal when the action took place on Luzon, the Bataan peninsula or the Harbour Defences on Corregidor Island and were entitled to the Philippine Presidential Unit Citation. Military who had received the Purple Heart during the early days of the Second World War specifically for merit and not for wounds could in some occasions also exchange the Purple Heart for the Bronze Star. To any foreign soldier that fought in close coöperation with the United States Army, the decoration could also be awarded.

The Bronze Star Medal was designed by Rudolf Freund of Bailey, Banks and Biddle who also designed the Silver Star. The decoration measures 1,5 inch (38 mm) over all. In the middle there can be found another bronze star with a diametre of 3/16 inch (4,8 mm). All radials in the centre of both stars continue in one each other. The back bears the inscription "HEROIC OR MERITIOUS ACHIEVEMENT" and a space to ingrave the recipients name.

Every next Bronze Star awarded was to be shown by a bronze oak leaf cluster (US Army, Air Corps and Air Force) or a golden star (US Navy, Marines and Coast Guard). At every fifth award, the bronze and golden were replaced by a a silver oak leaf cluster or silver star. A bronze "V" for "Valor" was awarded when the Bronze Star was received for heoism in battle, thus distincting the award from the Bronze Stars warded for merit. This "V" was introduced in 1945. The action it was to be awarded for had to be of significant value. Only one "V" was permitted to be worn on the ribbon. 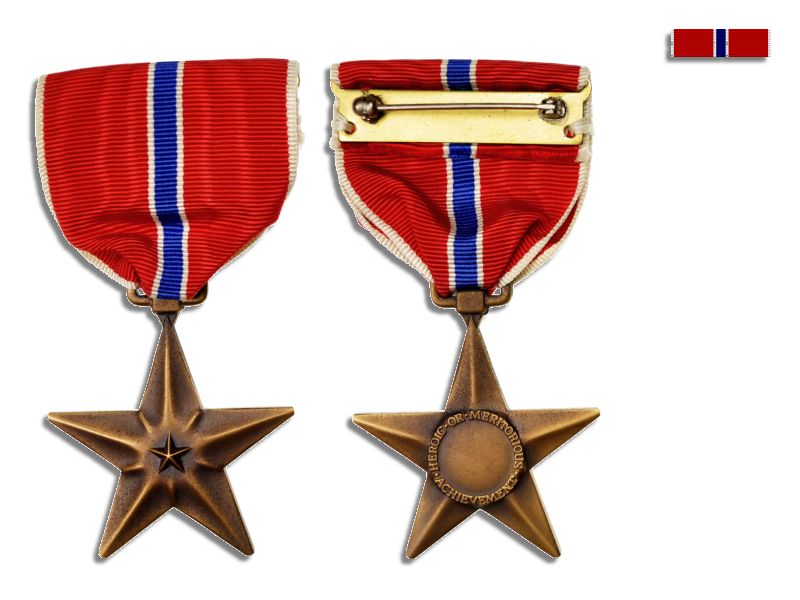