The World War Two Victory Medal was instituted by the US Congress July 6th, 1945, Public Law, 79th Congress in memory of any member of the American Armed Forces, including members of the Philippine Armed Forces who had been on active service or in reserve between December 7th, 1941 and December 31st, 1946.
Initially, the decoration was introduced as a ribbon and was named Victory Ribbon. In 1946 however, a medel was added as the World War Two Victory Medal.
The award consists of a bronze medal, 1,37" in diameter and was designed by Mr. Thomas M. Jones. The design was approved on February 5th, 1946. The obverse of the medal depicts the goddess of peace, Nike, looking at the rising sun and holding a broken sword, representing the broken power of the Axis nations.
Beneath her right foot, the helmet of he god Ajax is depicted, representing the end of hostilies. Behind her is the rising sun, representing the coming of peace. Next to her, the text World War II is engraved.
The reverse of the medal shows the Four Freedom lines: "Freedom from Fear and Want" and "Freedom of Speeech and Religion", as declared by President Roosevelt and separated by a palm branch. Around it, the text "United States of America" and the yesr "1941-1945" are engraved.
The ribbon, 1,37" in width shows a multi colored rainbow on each side, 0,35" in width, derived from the Allied World War I Victory Medal. The inner band in red represents the spilled blood of the soldiers. The narrow white bands between the red band and the rainbow symbolize the rays of hope.
For military units, a banner was instituted which is in use by the US Navy and the US Marine Corps only.
Formally, no period of time has been fixed during which military personell must have served to become eligible for the award. As President Truman had declared that hostilities had ended on December 31st, 1946, it is possible for soldiers to have received the award without having participated in any hostility or even having entered service after May 8th, 1945. 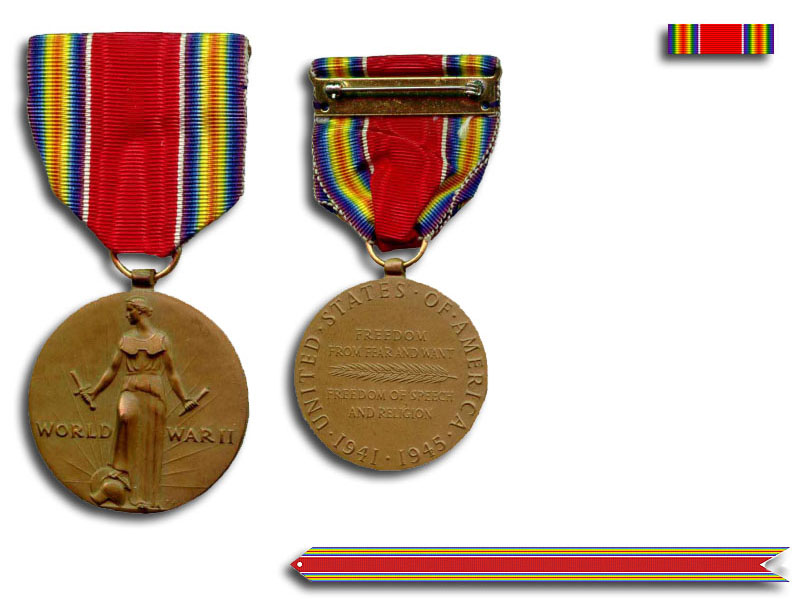