Laurence Allen Abercrombie was born in Lawrence, Massachusetts, on 11 October 1897, son of John Andrew and Mary Abercrombie (née Davenport). After graduating from High School, Abercrombie attended Phillips Academy in Andover, Massachusetts before transferring to the United States Naval Academy in Annapolis, Maryland in 1917. During 1917 and 1918, Abercrombie served as a midshipman aboard the USS Delaware (BB-28), USS Georgia (BB-15), USS Nevada (BB-36), and the USS Mississippi (BB-41).[3] Abercrombie graduated from Annapolis on 3 June 1920 and commissioned as an Ensign in the Navy.

The USS New Orleans (CA-32) was commissioned on the 15th of February 1934 with LT Abercrombie as a member of her crew, making him a Plankowner on the newly commissioned ship. Abercrombie served aboard the USS New Orleans until May of 1937, finishing his time as a communications officer. In June 1937, LCDR Abercrombie returned to Annapolis's Department of Modern Language and studied French further. He spent the summer of 1938 at the embassy in Paris, and later qualified as a French translator and interpreter.

In June 1939 LCDR Abercrombie was transferred to the USS Arizona (BB-39) as a gunnery officer. On 21 March 1941 LCDR Laurence A. Abercrombie took command of his first ship, the USS Drayton (DD-366), nicknamed "The Blue Beetle" because of her experimental blueish color. The USS Drayton was in Hawaiian waters during the Japanese attacked on Pearl Harbor Dec 7, 1941, but was not in port, and did not see any action. LCDR Abercrombie engaged and sunk an enemy vessel on December 24th, 1941, an action that would result in his first Navy Cross.

CDR Abercrombie was promoted to Captain in June 1942, and commanded the USS Drayton until 27 July 1942. CAPT Abercrombie then took command Destroyer Division NINE consisting of the USS Drayton (DD-366), USS Flusser (DD-368), USS Lamson (DD-367), and the USS Mahan (DD-364). On 22 October 1942 CAPT Abercrombie commanded the USS Lamson and USS Mahan on a daylight raid on Japanese forces near the Gilbert Islands. Abercrombie succeeded in sinking two Japanese ships, one being the Japanese gunboat Hakkaisan Maru. The two destroyers were also able to successfully repel Japanese arial attacks which resulted in no damage to either ship or any casualties. For this action, CAPT Abercrombie was a Gold Star in lieu of a second Navy Cross.

Citation:
"For extraordinary heroism and distinguished service in the line of his profession as Commanding Officer of the Destroyer U.S.S. DRAYTON (DD-366), during operations in the Far East on 24 December 1941 Commander Abercrombie skillfully directed his vessel in an engagement which resulted in the destruction of an enemy vessel. His conduct throughout was in keeping with the highest traditions of the Navy of the United States."

Citation:
"For extraordinary heroism and distinguished service in the line of his profession as the Commanding Officer of Destroyer Division NINE, which engaged Japanese naval forces in a daring daylight raid on the enemy patrol line south of the Gilbert Islands on 22 October 1942. Commander Abercrombie skillfully maneuvered his division, exercising such brilliant tactical judgment that heavy damage was inflicted upon the enemy. Two enemy vessels were sunk by the gunfire of his force, and repeated air attacks were repelled without damage to the ships or crews under his command. Through his leadership this bold mission was brought to a highly successful conclusion. His courageous conduct was in keeping with the highest traditions of the Naval Service."

Second NC received as a golden star to be worn on the ribbon of the first NC.

Citation:
"For extraordinary heroism and distinguished service in the line of his profession as Commanding Officer of the Destroyer U.S.S. DRAYTON (DD-366), as Screen Commander of a Task Force unit during action against Japanese aerial forces in the Solomon Islands area on 17 February 1943. By the accurate and timely warning given by the ships under his command, Commander Abercrombie enabled the task unit commander to dispose his transports and destroyers for the most effective action against hostile Torpedo Planes. Despite the difficulties and hazards of a night engagement during which five Japanese planes were destroyed, Commander Abercrombie brought his forces through without casualty or damage. Commander Abercrombie's inspiring leadership and the valiant devotion to duty of his command contributed in large measure to the outstanding success of these vital missions and reflect great credit upon the United States Naval Service."

Third NC received as a second golden star to be worn on the ribbon of the first NC.
Bureau of Naval Personnel Information Bulletin No. 316 (July 1943) 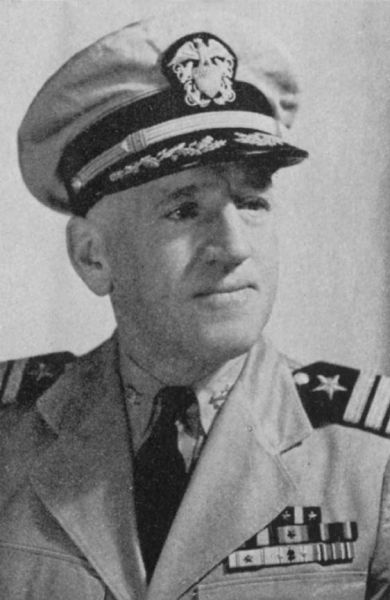