The American Campaign Medal was authorized by President Franklin D. Roosevelt on November 6th 1942. It could be awarded for service between December 7th 1941 and March 2nd 1946. It was not until 1948 until the criteria were made public. This was after the first example of the medal was awarded to General George C. Marshall on December 17th 1947.

The medal was designed by Thomas Hudson Jones, but the reverse side was designed by Adolph A. Wienman and is the same as on the European- African-Middle Eastern and the Asiatic-Pacific Campaign medals. The ribbons design was approved on November 24th 1942.

The Bronze medal bears on the obverse a Navy Cruiser and a B-24 bomber flying over, with a sinking enemy submarine on the foreground. The buildings in the background represent the "Arsenal of Democracy". Above this can be read the words "AMERICAN CAMPAIGN". On the reverse one can see an American Bald Eagle between the dates "1941-1945" and the words "UNITED STATES OF AMERICA".
The ribbon is mostly Oriental Blue with on the left and right side a band with white-black-scarlet-white stripes. In the middle is a band with black-white-scarlet stripes. The blue stands for the Americas, the central part of blue, white and red represents the continuance of the defence after Pearl Harbor. The white and black stripes and the red and white stripes represent the German and Japanese enemy.
A Bronze star on the ribbon was to indicate for which campaign the medal was received. For three campaigns a bronze star could be awarded, for the Antisubmarine, the Ground Combat or the Air Combat Campaigns, all between December 7th 1941 and September 2nd 1945.
A unit could be awarded with a streamer to represent the medal and to be worn on the Army flag. In Order of Precedence the medal is to be worn right after the American Defence Medal and before the Asiatic-Pacific Campaign Medal. For woman belonging to the Womans Army Corps it was to be worn right after the Womans Army Corps Service Medal and before the Asiatic-Pacific Campaign Medal.

The official criteria are: 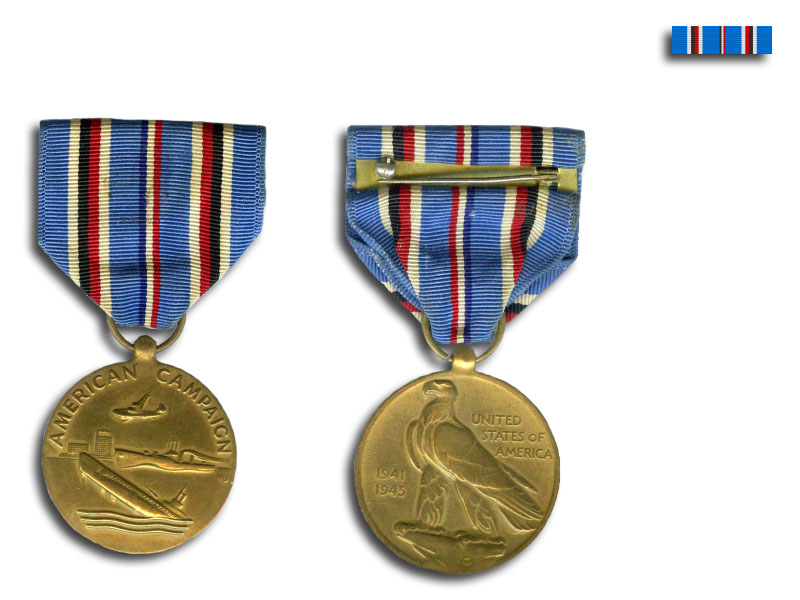