John Alderman graduated from the U.S. Naval Academy at Annapolis, Class of 1928. He retired as a Rear Admiral in the U.S. Navy.
He attended public schools of Portland, Eastern High School in Washington, DC, and Marion Institute, Marion, Alabama, before entering the US Naval Academy, Annapolis, Maryland, as a Midshipman from Oregon in 1924. Graduated and commissioned Ensign on 7 June 1928, he subsequently attained the rank of Captain, to date from 25 March 1945.

"For extraordinary heroism and distinguished service in the line of his profession as Commanding Officer of the Destroyer U.S.S. McFARLAND (DD-237), while on special missions in the Solomon islands area during the period 8 August 1942 to 18 October 1942. On repeated occasions, Lieutenant Commander Alderman courageously entered the Solomon waters to assist in the task of protecting the valuable supply lanes to Guadalcanal, in support of our land and sea defenses of that island. With utter disregard for his own safety, he exposed himself to the ever-present danger of hostile air attacks. On one occasion, his ship was so damaged by enemy fire that it was almost lost. By his perseverance, determination and technical ability, he made the necessary repairs to his ship, under the most adverse conditions, so that she was able to continue in the service of her country. His heroic conduct was in keeping with the highest traditions of the Naval Service."

"For exceptionally meritorious conduct in the performance of outstanding services to the Government of the United States as Commanding Officer of the U.S.S. BADOEING STRAIT in operations against the enemy from 4 November 1950 to 18 January 1951. With outstanding ability, energy, and high tactical skill, he operated his ship and its embarked Air Group as a unit of the United Nations Naval Forces furnishing invaluable support to our fighting forces in Korea by the destruction of enemy air opposition, troop concentrations, and the interdiction of the enemy's lines of communications supplies, and bases. During this period, the ship maintained a superior performance in every phase of operations and the immediate and effective response to calls for extra efforts reflected the highest caliber of leadership. His outstanding ability, professional skill, and thorough knowledge of tactical and operational requirements were in a large measure responsible for the successful accomplishment of the assigned missions of the Task Force. His distinguished performance above and beyond the normal call of duty were in keeping with the highest traditions of the United States Naval Service." 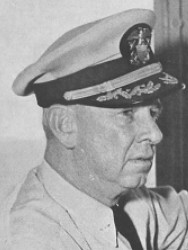 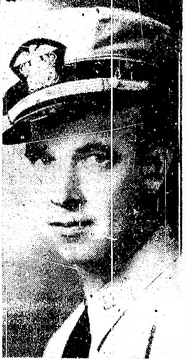