The American Defence Service Medal could be awarded with clasps to donate pre-war and foreign service. The clasps that could be awarded were:
"FOREIGN SERVICE" Clasp issued by the United States Army for military service outside the continental limits of the United States, including service in Alaska.
"BASE" Clasp issued by the U.S. Navy and United States Marine Corps for service outside the continental limits of the United States (service in either Alaska or Hawaii qualified).
"FLEET" Clasp issued by the Navy, Marine Corps and United States Coast Guard for service on the high seas while regularly attached to any vessels of the Atlantic, Pacific, or Asiatic fleets as well as vessels of the Naval Transport Service and vessels operating directly under the Chief of Naval Operations.
"SEA" Clasp issued by the Coast Guard for all other vessels and aircraft, not qualifying for the Fleet Clasp, which regularly conducted patrols at sea.
Also the decoration could be awarded with an:
"A" Device awarded to any member of the Navy who served duty in actual or potential belligerent contact with Axis Powers in the Atlantic Ocean between June 22 and December 7, 1941.
"Service star" worn in lieu of clasps when wearing the American Defense Service Medal as a ribbon on a military uniform. 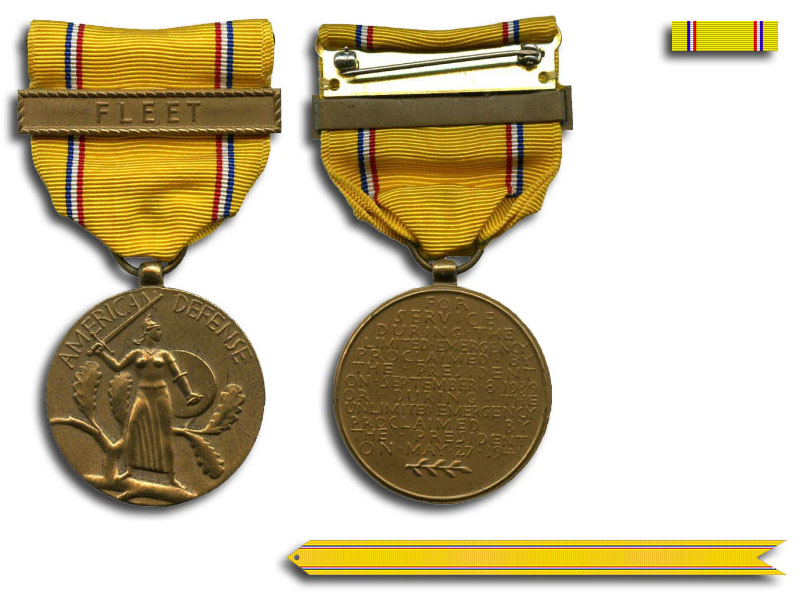