Richard Nott Antrim was Executive Officer aboard the USS Pope which was sunk by the Japanese during the Battle of the Java Sea. As their senior officer he organized the 150 crewmembers that survived the sinking. When they were finally rescued by a Japanese destroyer one week after the sinking they were led into captivity.

With "Bronzen Kruis" that were later withdrawn and replaced by the "Bronzen Leeuw".

With "Eervolle Vermelding" that were later withdrawn and replaced by the "Bronzen Leeuw".

The Bronze Cross with honourable mention was later withdrawn and replaced with a Bronze Lion.

Citation:
"For heroic service while a Japanese Prisoner-of-War. He was forced to take charge of a labor party and assigned the task of constructing slit trenches for bomb protection. Through self-effacing courage and sheer audacity of purpose, he caused to be constructed under the very eyes and alert surveillance of Japanese guards, a huge sign "U.S." This was done by rearranging the construction work of the slit trenches from the Japanese approved plan to one of his own devising, after causing the Japanese to concur in the changes suggested. The sign, if recognized by the Japanese, would have resulted in Antrim's immediate beheading, but Antrim's well-thought plan would result in Allied photographs indicating the occupants of the trenches and thus save hundreds of prisoners' lives."

Received with "V" for "Valor".

"For conspicuous gallantry and intrepidity at the risk of his life above and beyond the call of duty while interned as a prisoner of war of the enemy Japanese in the city of Makassar, Celebes, Netherlands East Indies, in April 1942. Acting instantly on behalf of a naval officer who was subjected to a vicious clubbing by a frenzied Japanese guard venting his insane wrath upon the helpless prisoner, Comdr. (then Lt.) Antrim boldly intervened, attempting to quiet the guard and finally persuading him to discuss the charges against the officer. With the entire Japanese force assembled and making extraordinary preparations for the threatened beating, and with the tension heightened by 2,700 Allied prisoners rapidly closing in, Comdr. Antrim courageously appealed to the fanatic enemy, risking his own life in a desperate effort to mitigate the punishment. When the other had been beaten unconscious by 15 blows of a hawser and was repeatedly kicked by 3 soldiers to a point beyond which he could not survive, Comdr. Antrim gallantly stepped forward and indicated to the perplexed guards that he would take the remainder of the punishment, throwing the Japanese completely off balance in their amazement and eliciting a roar of acclaim from the suddenly inspired Allied prisoners. By his fearless leadership and valiant concern for the welfare of another, he not only saved the life of a fellow officer and stunned the Japanese into sparing his own life but also brought about a new respect for American officers and men and a great improvement in camp living conditions. His heroic conduct throughout reflects the highest credit upon Comdr. Antrim and the U.S. Naval Service."

"For extraordinary heroism and distinguished service in the line of this profession as Executive Officer of the Destroyer U.S.S. POPE (DD-225), in combat with the enemy in the Java Sea on 1 March 1942, when his ship engaged an overwhelming number of Japanese surface and aircraft. An experienced destroyer officer, tried in two previous battles, Commander Antrim for a period of over five hours, under intense hostile fire and bombings, coolly, calmly, efficiently, with contempt for danger and with remarkable judgment carried out his vital battle tasks of navigation, fire direction, and damage control with a preciseness that left nothing to be desired, and in such a manner as to be highly instrumental in causing the enemy extensive damage. He was exact and sound in his advising his Commanding Officer regarding maneuvering, target selection, and the use of smoke. Finally, with his ship sinking as a result of enemy bombing, although bruised and shaken and painfully injured by an explosion within the ship, he continued with extraordinary heroism and perseverance in his immediate task of supervising the abandoning of the ship. Courageously exposing himself to low-flying enemy bombers, he directed the men over the side in such a manner that group targets would not be offered the enemy from the air, at the same time supervising the removal of the wounded from the ship and the launching of the one available boat. Later events indicated the soundness of his judgment and showed him to be a prime factor in the ultimate survival of not only the wounded men in the boat but also the entire ship's compliment still alive after the actual sinking. No deaths resulted from repeated enemy strafing attacks on the crew in the water. The boat, directed by Commander Antrim, after his being picked from the water, rounded up three life rafts and one hundred and fifty-one survivors into a controllable group, and for a period of almost three days until their capture by a Japanese destroyer, this boat served to supply personnel in the sea with the necessary minimum life-sustaining requirements of water, food, and rest. There was no loss of life in the water. Commander Antrim's performance of duty in battle contributed immeasurably to the damage inflicted on the Japanese force and to his sound judgment are owed the lives of many who might otherwise have perished. His meritorious performance of duty and heroic conduct were at all times in keeping with the highest traditions of the United States Naval Service." 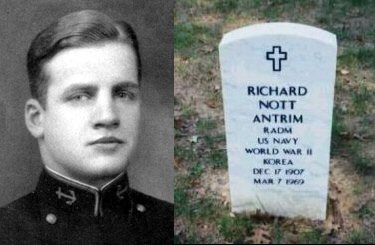 Battle of the Java Sea