Before September 8th 1939 a gold metal lapel button could be obtained. It shows a dexter eagle with its wings perched within a ring. The ring displays seven white and six red vertical stripes and a blue chief with the words "National Defence". Between September 8th 1939 and December 31st 1946, the button was all gold colour metal without words and colours. The dexter wing of the eagle folds behind and the sinister in front of the ring.

It was permitted to wear when the person served honourably prior to September 8th 1939 as either an enlisted man, warrant officer, nurse, contract surgeon, veterinarian, or commissioned officer, in the Regular Army or a Citizen's Military Training Camp for 2 months, or in the National Guard, Enlisted Reserve Corps, or senior ROTC for 1 year, or in junior ROTC for 2 years. In 1943 it was decided the button could be worn by Army personnel honourably discharged since September 9th 1939. In 1944 it was described the button could be either in gold colour metal or gold plated plastic. In 1947 it was decided that the eligibility requirements for the Honorable Service Lapel Button are honorable federal military service between 8 Sep 1939 and 31 Dec 1946.

It was often referred to as "Ruptured Duck". On November 29th 1944, with Circular No. 454, the War Department adopted the Honorable Discharge Emblem. It was in design similar to the Lapel Button, but the Eagle and Ring were placed on a piece of cloth with thread. It was issued together with the button. Upon the discharge from the military the emblem was to be sewn on the clothing, immediately above the pocket on the right breast. 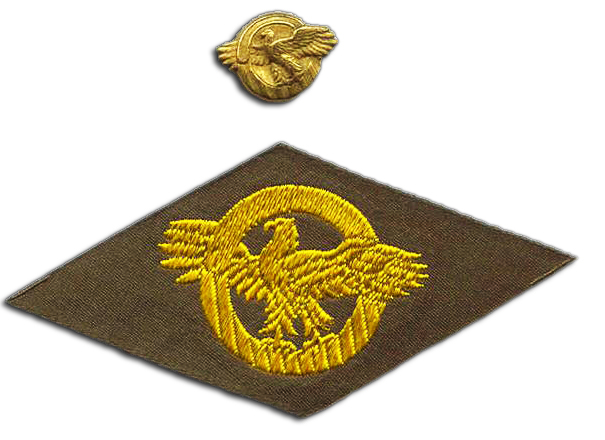