Captain Abernethy, born 14 June 1899, at Oklahoma City, Oklahoma, was graduated from the Oklahoma City High School before entering the US Naval Academy, Annapolis, Maryland, from his native state, in June 1917. He had World War I service during the summer of 1918 as a Midshipman aboard USS Missouri. Graduated from the Naval Academy and commissioned Ensign in June 1921, he subsequently advanced through the grades to that of Captain, to rank from 21 June 1942.

Following graduation in June 1921, Captain Abernethy was ordered to duty aboard the battleship New York, then serving in the Pacific. Thereafter he made a cruise in the destroyer Parrot, on duty with the Eastern Mediterranean Squadron, cruising to Southern Russian ports, and was present at the burning of Smyrna in September 1922. He returned to the United States aboard USS Goff, and proceeded to Newport, Rhode Island, where he had instruction at the Torpedo School. Sea duty prior to World War II included service aboard the destroyers Reuben James and Greer, the battleship New York and the cruiser Salt Lake City. For two years he was flag lieutenant on the staff of Commander, Cruiser Division 4, USS Northampton, flagship, and from May 1937 to May 1938 he served as communications officer of USS Maryland.

His tours of shore duty prior to World War II were as aide to the Commandant of the Sixth, Seventh, and Eighth Naval Districts; at the Naval Torpedo Station, Newport, Rhode Island; and as inspector of guns at the Naval Gun Factory, Washington, DC.

In July 1940 he was ordered to the Orient, where he assumed command of USS Pecos, Asiatic Fleet tanker. His ship was in Manila on 7 December 1941, but left the night of 8 December for Darwin, Australia. After missing the entry of the Japanese at Keopang, Dutch East Indies, by five hours, the Pecos went to Soerabaja and was nearby when USS Houston and USS Marblehead were hit by Japanese bombs. After the battle, the Pecos proceeded to Tjilatjap, where she remained to fuel warships of the United States, the Netherlands, and Great Britain.

On the afternoon of 27 February 1942, USS Langley was sunk off the southern coast of Java and the Pecos was ordered to take aboard the survivors who had been picked up by two destroyers. The Pecos and the two destroyers made a rendezvous at Christmas Island the next morning to make the exchange but arrived just in time for a Japanese bombing attack. Survivors of the Langley were transferred to the Pecos the following morning at sea. About noon the same day, aircraft from a Japanese aircraft carrier started attacking the Pecos and later in the afternoon sank her. Captain Abernethy was injured during the Japanese attack and was later awarded the Purple Heart. For extraordinary heroism as Commanding Officer of the Pecos, he was awarded the Navy Cross.
After the sinking of the Pecos, Captain Abernethy became executive officer of USS President Jackson. The President Jackson was the first ship to land troops at Guadalcanal on 7 August 1942. During the following several months, that troop ship was engaged in reinforcing Guadalcanal and participated in several of the battles in that area. For services during that early period of the war, Captain Abernethy was awarded the Legion of Merit.
In June 1943 Captain Abernethy assumed command of Boat Pool Number 8 which carried 20,000 troops to various beaches in the Rendova-Munda area, resulting in the capture of the Munda airport. Although under frequent enemy attack during that period, not one soldier was lost while being transported by the landing craft under his command. After the capture of Munda, Captain Abernethy assumed command of the President Jackson and later participated in the landings at Bougainville and Emirau.
Captain Abernethy was ordered in March 1944 to San Pedro, California, for the purpose of organizing the San Pedro Shakedown Group, and as prospective Commanding Officer. While under his command, 216 large auxiliary ships built on the West Coast were "shaken down" and for that service Captain Abernethy received a second Letter of Commendation from Fleet Admiral Nimitz.
From May 1945 until November 1946 Captain Abernethy was Port Director and Operations Officer of the Thirteenth Naval District, Seattle, Washington. In November 1946 he assumed command of USS Tucson, and relieved of that command in July 1947, was ordered to duty as Commanding Officer of the Naval Ordnance Plant at South Charleston, West Virginia. On 11 August 1947, he received further orders to duty as Public Information Officer on the staff of Commander, Marianas. He served in the above assignment until 7 May 1948, when he was ordered to duty with the San Diego Group, Pacific Reserve Fleet, San Diego, California.

The President of the United States of America takes pleasure in presenting the Navy Cross to Captain [then Commander] Elmer Paul Abernethy (NSN: 0-28168), United States Navy, for extraordinary heroism and distinguished service in the line of his profession as Commanding Officer of the Fleet Oiler U.S.S. PECOS (AO-6), during the sinking of that vessel by Japanese air forces, off Christmas Island on 1 March 1942. Captain Abernethy put up a terrific fight against waves of dive bombers which swept down out of the sun. When the ship finally was overwhelmed and sinking, he calmly directed abandoning operations under a hail of fire from enemy fliers who kept circling the ship and strafing helpless survivors clinging to life rafts and floating debris. Captain Abernethy's conduct throughout was in keeping with the highest traditions of the Navy of the United States.

The President of the United States of America takes pleasure in presenting the Legion of Merit with Combat "V" to Captain Elmer Paul Abernethy (NSN: 0-28168), United States Navy, for exceptionally meritorious conduct in the performance of outstanding services to the Government of the United States as the Executive Officer of a Transport operating in the Solomon Islands Area during the period from 7 August 1942 to 30 June 1943. Captain Abernethy participated in the initial occupation of Guadalcanal-Tulagi on 7 August 1943, and later made many trips into the forward area to deliver reinforcements to the American garrison on Guadalcanal. His ship carried troops and supplies for the assault on Rendova Island on 30 June 1943. While engaged in these operations, he was subjected to frequent enemy air and submarine attacks. By his skill and determination, he assisted his Commanding Officer in bringing his ship through without damage. On all occasions he demonstrated outstanding courage, skill, determination and devotion to duty. His conduct throughout was in keeping with the highest traditions of the United States Naval Service. (Captain Abernethy is authorized to wear the Combat "V".)

He was awarded a Letter of Commendation, with authorization to wear the Commendation Ribbon, by Fleet Admiral Nimitz, Commander in Chief, Us Pacific Fleet and Pacific Ocean Areas with the following citation:
"For meritorious and efficient performance of duty as Commanding Officer of an attack transport vessel carrying reinforcements to the American held positions in the Empress Augusta Bay area, Bougainville Island on November 8, 1943. When the force of which his ship was a part was subjected to a coordinated attack by approximately one hundred Japanese torpedo and fighter planes, Captain Abernethy, by skillfully maneuvering his ship under extremely difficult navigational conditions, assisted in repelling the attack and in destroying several enemy aircraft. His skill and able leadership contributed materially to the successful completion of this vital mission and were in keeping with the highest traditions of the naval service."

"For distinguishing himself by meritorious conduct in the performance of outstanding service as Commander, San Pedro Shakedown Group of the Fleet Operational Training Command, Pacific. As a result of his initiative, energy, and administrative ability, over 215 ships, manned by thousands of officers and men, received the shakedown training essential to their successful operation. His conduct throughout was an inspiration to his officers and men and in keeping with the highest traditions of the United States Naval Service." 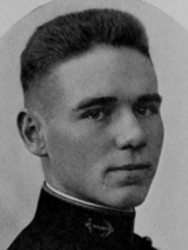