US Naval Reserve Officer during WW2. He was awarded the Navy Cross for his actions as commanding officer of the destroyer escort USS BUCKLEY (DE-51) when it pursued, rammed and sank the German submarine U-66 during the night of May 5-6, 1944 off the coast of North Africa.

Abel was born in Washington, D.C. but raised by his mother in Scarsdale, N.Y. He attended Harvard College where he was a French major and participated in NROTC. After graduating from Harvard Law School in 1940, he moved to San Francisco, California where he practiced estate planning and taxes.

Called to active duty at the start of World War II, he spent a year at Corpus Christi, Texas before assuming command of a sub chaser escorting tanker convoys from refineries in the Caribbean to the mid Atlantic to provide fuel for the European theater of operations. In 1943 he was selected as the commanding officer of the newly- commissioned destroyer escort USS BUCKLEY (DE-51), lead ship in her class of ships whose primary mission was anti- submarine warfare in "hunter killer groups" with escort aircraft carriers (CVE's).

During the pre-dawn hours of his 28th birthday (6 May 1944), Abel's ship engaged a surfaced German submarine, U-66 in the Atlantic about 500 nm off the coast of North Africa in what has been called the "most exciting" submarine engagement of WW2. After the U-boat sank, about half its crew, 36 German sailors, were rescued and taken prisoner by BUCKLEY. This battle is probably the closest naval combat of modern warfare, as BUCKLEY'S crew battled German sailors who swarmed about the destroyer with shell cases, fists and coffee cups, after BUCKLEY rammed the submarine and rode up on its back.
After 3 years afloat, Abel was assigned shore duty at Minneapolis, Minnesota. Returning to civilian life after WW2, for many years Abel was a partner in a large San Francisco law firm where most of his co-workers had no idea of his wartime service that he rarely mentioned.

Years later, one of the German crew survivors contacted Abel and told him, "All of us survivors of the U-66 have always had the desire to get to know our wartime adversaries in the war on the sea and if the opportunity presented itself to say thank you for the fair treatment on board the Buckley and for saving our lives." Mr. Abel then helped organize a reunion of the former foes in Germany where he expressed regret that he could not have saved more lives. Abel remained in the active Navy Reserve and retired as a captain in 1960. He was 89 years old when he died at his home in San Rafael, California in December 2005.

Brent Maxwell Abel, whose prestigious but unpretentious law career was topped only by his World War II heroism in which his crew sank a German U-boat and then rescued, fed and clothed its surrendering sailors, has died at his home in San Rafael. He was 89.

"He was a total class act," said Donn Pickett, managing partner of the San Francisco office of Bingham McCutchen, who worked for Mr. Abel when he started in the 1970s.

"He had extraordinary intellect, outstanding judgment and was the kind of person that the firm would turn to for an opinion on every subject, because of his knowledge, even if it was outside his area," Pickett said.

Mr. Abel was born in 1916 in Washington, D.C., and he and his sister, Emily, were raised by their mother in Scarsdale, N.Y. Mr. Abel attended Harvard University, majoring in French, before attending Harvard Law School.

He met and married his first wife, Georgiana Powell, while in law school. Early in his career, the couple moved to San Francisco. He quickly became a prominent lawyer in estate planning and taxes and later served as president of both the San Francisco and California bar associations.

After a divorce, Mr. Abel married his second wife, Corinne, in 1974.

Although Mr. Abel's San Francisco office was adorned with memorabilia of World War II, few colleagues knew the extent of his heroism and kindness during one battle when he was captain of the destroyer escort Buckley.

In the predawn hours of May 6, 1944 -- Lt. Cmdr. Abel's 28th birthday -- his ship engaged a surfaced German submarine in the Central Atlantic. After an exchange of fire, the Buckley rammed the U-boat.

The Web site for the Destroyer Escort Sailors Association gives this account of what followed: "Then there occurred one of the most remarkable incidents of the Atlantic War as attributable to an extraordinary courage on the part of the enemy as to the valor of the Buckley crew. Men began swarming out of the conning tower and forward hatch of the submarine and up onto the (forward deck) of Buckley. Because the sub was now below the maximum depression of the (Buckley's) guns, a bitter fight had suddenly become man-to-man for the possession of Buckley!

"The Buckley crew rallied quickly and fought their enemy with objects, fists and guns. Still the enemy persisted in boarding. Captain Abel had to make another decision. Engines were reversed as Buckley backed away from the sub. 'All engines ahead full!' Guns crews returned to their stations pouring a living hell of fire into U-66.''

That's when the sub's remaining crewmembers turned their mortally wounded ship and sideswiped the Buckley, causing serious damage. The U-boat sank, and the Buckley crew captured and rescued 36 German sailors.

Lt. Cmdr. Abel, who would receive the Navy Cross for gallantry, credited the victory to his crew for its teamwork and calm under pressure.

According to an account in the New Yorker magazine, the episode was called "probably the closest naval combat of modern warfare."

What followed later was nearly as dramatic.

Years after the battle, one of the German survivors located Mr. Abel and told him, the New Yorker reported: "All of us survivors of the U-66 have always had the desire to get to know our wartime adversaries in the war on the sea and if the opportunity presented itself to say thank you for the fair treatment on board the Buckley and for saving our lives."

Mr. Abel helped organize a reunion of the opposing sides in Germany, and when the evening finally occurred, he not only acknowledged that he was proud of his accomplishment, he said he wished he could have saved more lives.

Some of his law colleagues and proteges found out about Mr. Abel's distinguished military career only upon his death.

"Just meeting him, you wouldn't know he was a war hero," said Pickett. "He was very refined, and intellectual and dignified."

"He had these great experiences, and he never talked about them. He downplayed the incident. ... In fact, he was very interested in other people and usually kept the conversation about the other person," said Fowler.

A universal theme in Mr. Abel's career was compassion for views other than his own. When a wealthy Peninsula client wanted to contribute to the Black Panthers organization in Oakland in the 1960s, Mr. Abel, a member of the Bohemian Club and considerably more conservative than his client, suggested she direct the donation for a specific use, and suggested her money go to the breakfast program. She followed his advice.

"It was good lawyering, and he was sensitive to her world view," said Fowler.

Mr. Abel also became enthusiastic about his cattle ranch in Yuba City (Sutter County), where he would name his cattle after friends, including Fowler's wife, Mayhill, whom he admired.

The President of the United States of America takes pleasure in presenting the Navy Cross to Lieutenant Commander Brent Maxwell Abel, United States Navy, for extraordinary heroism and distinguished service in the line of his profession as Commanding Officer of the Destroyer Escort U.S.S. BUCKLEY (DE-51), in offensive action against a German submarine during while patrolling the Atlantic Coast on the early morning of 6 May 1944. Lieutenant Commander Abel expertly directed his command and made an undetected, high-speed approach in bright moonlight to a surfaced German U-boat. With skilled seamanship, he silenced its guns within four minutes after contact, despite a heavy barrage of enemy torpedo and automatic weapon fire. Narrowly escaping another torpedo, he then closed on the wildly maneuvering submarine, raked it with all available fire and rammed, with the enemy attempting to board the vessel in retaliation. Withstanding the desperate attacks of the enemy ship, which tried to ram after the combatants became disengaged, he persistently held to his target until the submarine, with its conning tower shattered and burning fiercely, all hatches open, abandoned by its crew and completely out of control, disappeared beneath the surface of the water and exploded. His conduct throughout was in keeping with the highest traditions of the Navy of the United States. 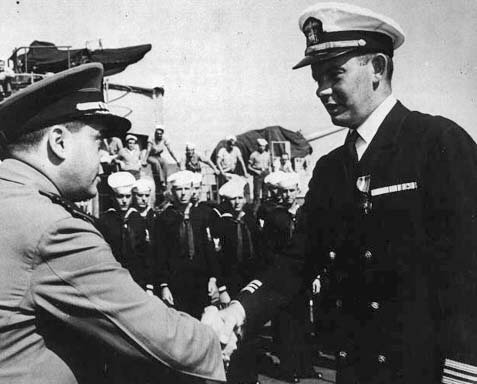