03.02.1942: enlisted in the Unites States Marine Corps, Cincinnati, Ohio
04.02.1942-15.03.1942: boot camp training, Marine Corps Recruit Depot Parris Island, South Carolina
16.03.1942: assigned to the Marine Barracks Quantico, Virginia
07.08.1942: assigned to the Company "A", 1st Raider Battalion, Fleet Marine Force, onboard USS Little (APD-4), landed at Tulagi, Guadalcanal, British Solomon Islands
07.08.1942: Company "A" moved inland and down the right slope of Tulagi's central ridge
07.08.1942: Company "A" took positions for the night west of a cricket ground on the island, as part of the defensive line extending along the ridge
07.08.1942: Japanese launched a fierce nocturnal counterattack which drove a wedge between the two Raider companies. Isolating the latter near the beachhead, the enemy concentrated their efforts on Company "A"
07.08.1942: Ahrens, in a security detachment assigned the task of protecting the Raiders' right flank, singlehandedly engaged a group of Japanese in hand-to-hand combat as they attempted to infiltrate the Raiders' rear
08.08.1942: found mortally wounded, with 13 dead Japanese soldiers around his position, died in the arms of then Major Lewis William Walt
00.00.1943: the destroyer escort USS Ahrens (DE-575) was named in his honor

"The President of the United States takes pride in presenting the Navy Cross (Posthumously) to Edward Henry Ahrens (358161), Private First Class, U.S. Marine Corps (Reserve), for extraordinary heroism and devotion to duty while serving with Company A, FIRST Marine Raider Battalion, during the landing assault and seizure of enemy Japanese-held Tulagi Island, British Solomon Islands, on the night of 78 August 1942. While a member of a security detachment protecting the right flank of his battalion, Private First Class Ahrens, with utter disregard for his own personal safety, single-handed engaged in hand-to-hand combat a group of the enemy attempting to infiltrate the rear of the battalion. Although mortally wounded, he succeeded in killing the officer in command of the hostile unit and two other Japanese, thereby breaking up the attack. His great personal valor and indomitable fighting spirit were in keeping with the highest traditions of the United States Naval Service. He gallantly gave his life in the defense of his country." 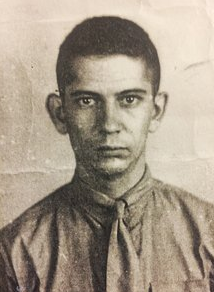